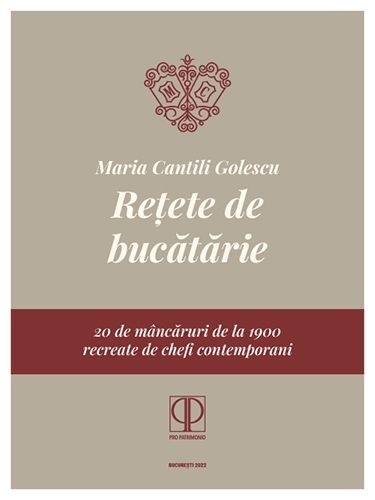 Starting from the original manuscript turned digital „Recettes de Cuisine”, after it was transcribed, translated, explained and tested, we arrived at the form of a contemporary adapted editorial product called “Recipes”, Maria Cantili Golescu.

Maria Cantili Golescu’s culinary notebook contains 144 pages of “kitchen” recipes and household tips, to which she has added a final 8-page table of contents. On the first page, Maria began her notebook with the following words:

On the page before the title page, she wrote down her measuring units in the Anglo-Saxon system, translating them into metric approximations:

It is important to go through this material understanding that she did not write her notebook with the intention of ever publishing it – it was not intended to be an original cookbook, but a support in her own kitchen. As was the custom (carried on from previous generations and carried forward), each housewife gathered her more elaborate recipes for main courses, sauces, desserts, preserves, etc. from various sources: received from other housewives/cooks or copied from magazines and cookbooks, less accessible in those days.

By 1900, a limited number of gastronomic books had been published in Wallachia and Moldavia and not all households had access to them. In addition, as was the fashion across the continent, French cuisine had become the guiding light for anyone with gourmet pretensions. It was therefore desirable to have on hand a collection of French recipes suitable for any occasion.

When she started her diary, Maria had just turned 19. She had just received as gift from the Central Stationery Shop at 113 Rue St. Dominique (now a clothing store) a notebook with cloth-covered card covers and lined dictation-style sheets. The cover had been personalized with her initials – “MC” (we reproduced the monogram on the cover of our notebook). Over the next year, she meticulously jotted down her various recipes in French, English, German and (one) Romanian, filling every page to the last. 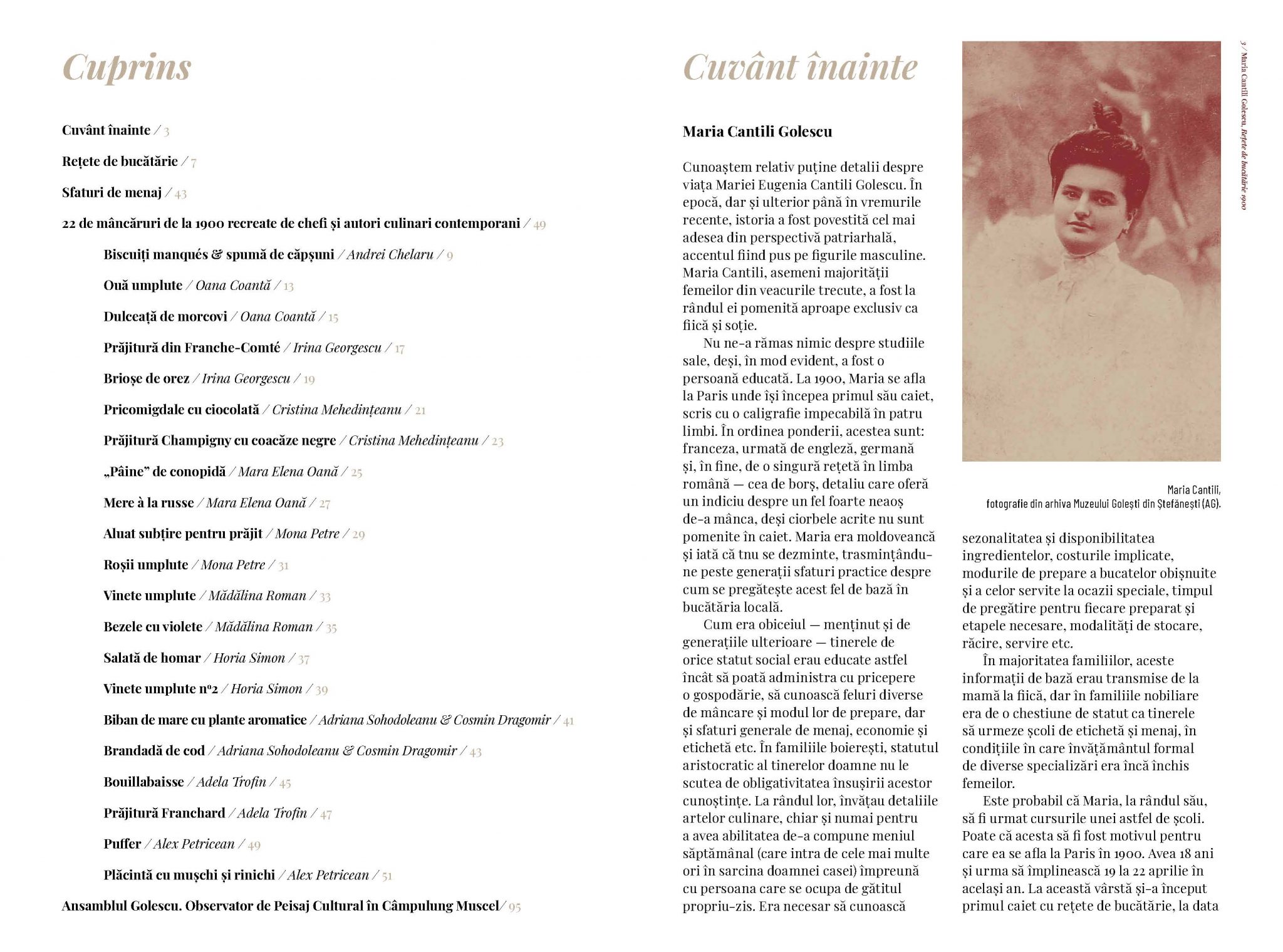 These dishes include a rich range of dishes, soups, drinks, desserts, doughs, ice creams, suitable to be served at different times of the day both at everyday meals and at the most festive for guests. Housekeeping tips (how to clean flannel, silverware, leather, lace, etc., how to prepare holiday decorations, and more) come in turn, interspersed among the food recipes. The approximate order is established at the end, when she reviews the course of the whole notebook, notes the page numbers and composes a table of contents referring to the pages where they can be found.

The recipes are often written with few explanations, as was the practice. It was assumed that the person reading them had sufficient knowledge in the art of cooking to intuit the steps required. Sometimes, for example, he omits to say “put it in the oven” – whoever cooked from this notebook would have understood by itself. The shortest of the recipes is dispatched in a few words: Pie dough. 250 g flour, 150 g butter, 30 g sugar, 1 whole egg, 1 yolk. No further explanation. Others, are described in detail: the pastry dough exceeds two pages.

We added explanations notes where I considered them necessary. These may regard ingredients that are less commonly used today, or historic ones that have been lost from consumption or trade. Also, where the method of preparation seems incomprehensible to the contemporary reader, we have provided explanations detailing the context: until the early part of the 20th century, sugar could come in the form of solid lumps/cups from which you would crush and mash as much as you needed; another example relates to the cooling methods of the time (in the cellar, with ice, with salt etc). Some recipes indicate the use of hearth-type ovens, others a primitive type of cooking machine, such as those with a griddle – but all the dishes described can be adapted with a little imagination to today’s technology. 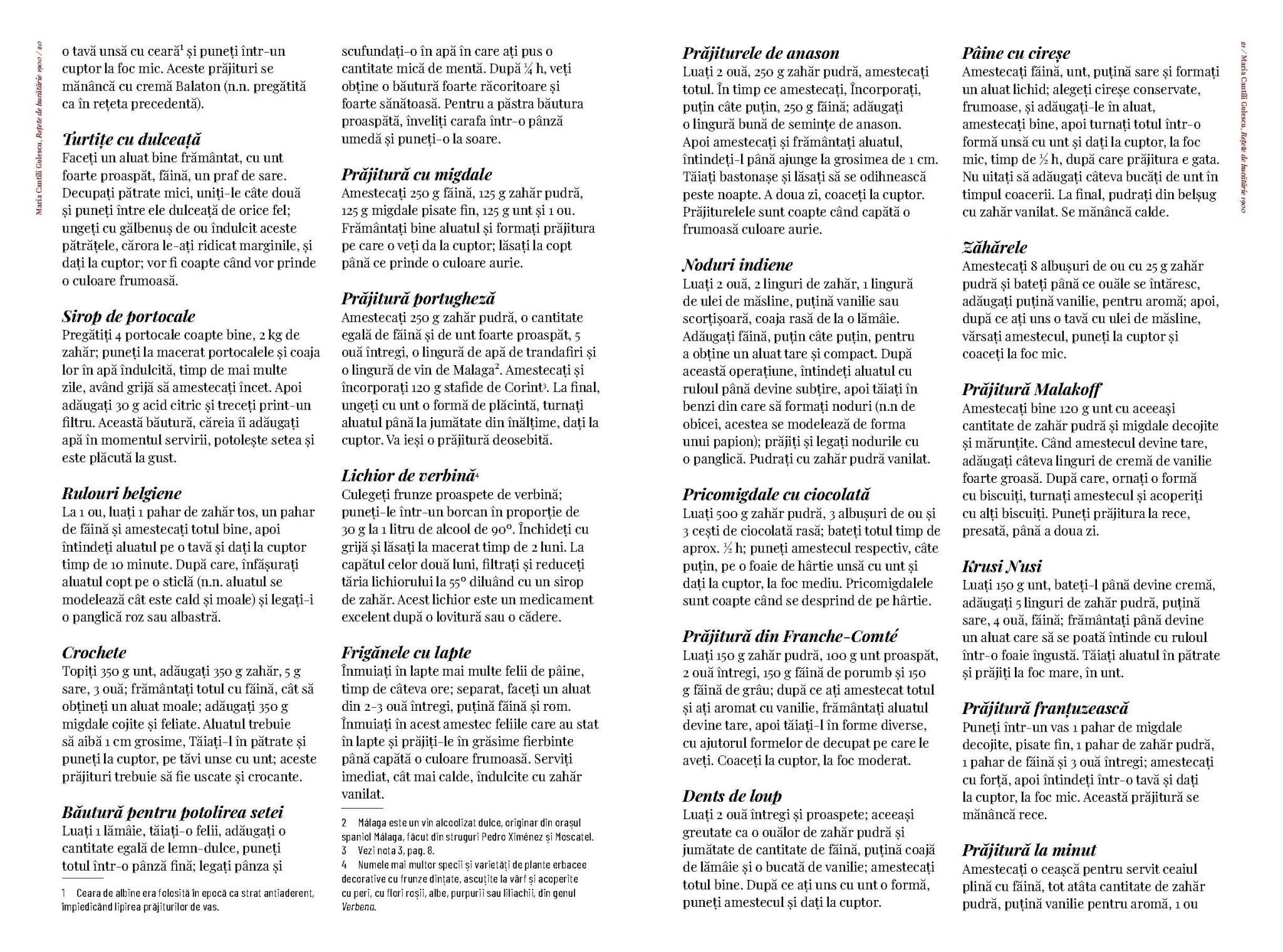 At the end of the notebook we have included a limited series of recipes photographed and explained at length, drawing on the creativity of several chefs and culinary authors who have leafed through Maria Cantili’s notebook from 1900-1901, selected a number of recipes from it and recreated them in the conditions of a contemporary kitchen. They have brought them up to date, following their personal inspiration and style. Below, you can follow the 22 dishes, starting with the original recipe at the top of each page, accompanied by detailed explanations of the ingredients and preparation process.

We would also like to thank all those involved in the production of this material, chefs and culinary authors: Andrei Chelaru, Oana Coantă, Cosmin Dragomir, Irina Georgescu, Cristina Mehedințeanu, Mara Elena Oană, Mădălina Roman, Alex Petricean, Horia Simon, Adriana Sohodoleanu and Adela Trofin; to the coordinator and editor Mona Petre who contributed two recipes, to the translators Nona Henți and Aura Pandele; Mirela Duculescu for editorial advice and the staff of the Golești Museum in Ștefănești (AG), represented by Cristina Boțoghină, for providing some unknown details about the life of Maria Cantili Golescu.