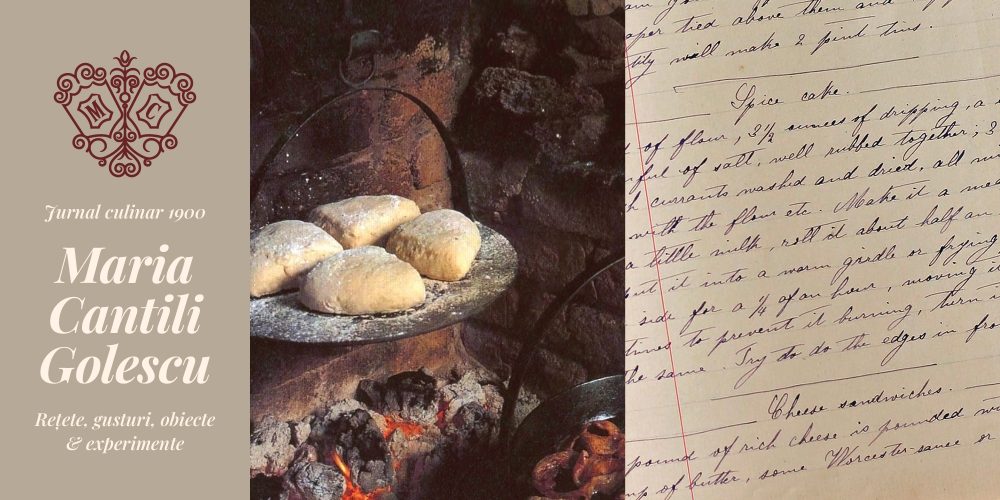 Written between 1900 and 1901, Maria Cantili Golescu’s recipe book covers a fascinating period in the history of Romanian gastronomy, as it contributes to the specific literature with culinary material from a decade from which no other cookbook survives.

Cantili most likely gathered her recipes from various French, English, German and Romanian materials available during the Golescu couple’s travels across the European continent, but certainly also through an exchange of recipes “housewife to housewife”, as was the custom before the widespread diffusion of culinary publications. They reflect a predilection for cosmopolitan, Western cuisine, under the auspices of French gastronomic trends, considered at the time to be the height of culinary refinement. These trends had already been announced by 19th-century cookbooks (Kogălniceanu-Negruzzi, Hințescu, Ionnin, Maurer, Steriadi), but also by those that followed in the next decades, in the midst of the inter-war era (Bacalbașa, Marin).

Set on the border between centuries, but also at the crossroads between traditional and modern cooking styles, the recipe book also offers some exciting insights into the design of old kitchens before the widespread adoption of modern cooking equipment. Among these small details, easily missed on a quick read, we were intrigued by the description of how to make a cake called “Spice cake” and the utensils mentioned by the author.

“1 pound of flour, 3 ½ ounces of dripping, a small teaspoonful of salt, well rubbed together; 3 ounces of fresh currants mashed and dried, all mixed well together with the flour etc. make it a medium paste with a little mill, roll,, it about half an inch thick, then put it into a creed girdle or frying pan, bake on one side for a ¼ of an hour, moving it round 2 or 3 times to prevent it burning, turn it over and do the same. Try to do the edges in front of the fire. “ (-*despite the name of this dish, the spices are not mentioned. Traditionally, a mixture of cinnamon, nutmeg and cloves is also put in the composition of such a cake).

The girdle mentioned here is a historic cooking utensil – almost forgotten today – a practical and useful object especially for cooking over an open fire or hearth. It was most often made of cast iron, but also of other metals, was round or rectangular in shape and, characteristically, had a looped handle that allowed it to be hung over a fire or a hot pan. It was used extensively throughout European culinary history, in times when the source of fire in the kitchen were wood-burning fireplaces or cheminées. The object is coming back into fashion especially among historical gastronomy and culinary reenactment enthusiasts, but also among those interested in traditional, sustainable and durable cooking objects.