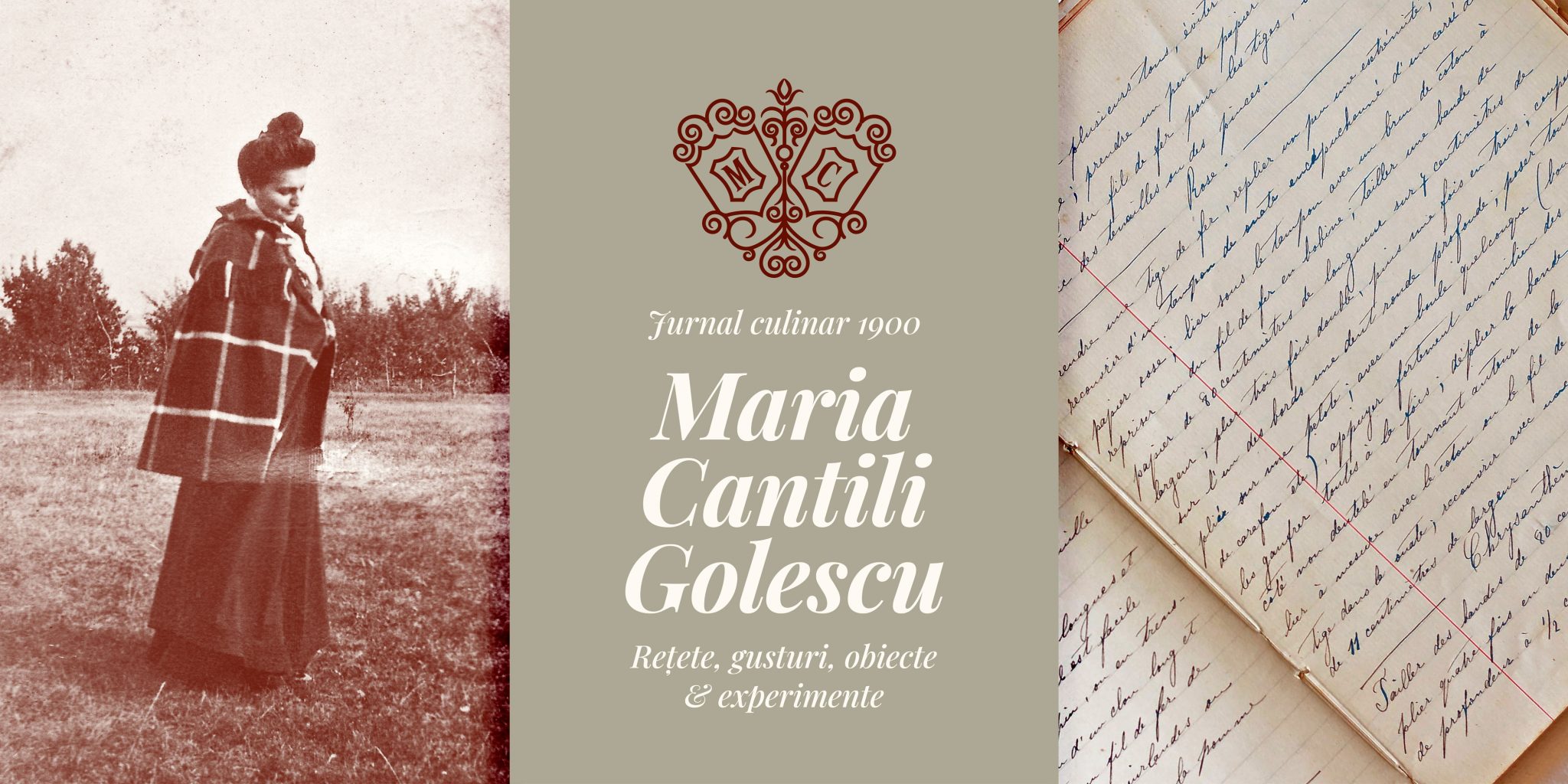 Inspired by a discovery that gave us no peace during the pandemic, we are launching a new cultural and creative project that will bring together translators and linguists, chefs and culinary experts, students and craftsmen, in a unique concept dedicated to the Golescu Villa.

In the Golescu family’s huge library, we discovered two recipe notebooks from around 1900 written by Maria Cantili Golescu, Vasile Golescu’s wife. An older notebook begun in Paris in January 1900 and completed in Bacău a year later. The second notebook was started 30 years later, in Câmpulung and finished there in 1935. The recipes are written in a time-specific script in French, Romanian, English and German. The notebooks offer a unique insight into the bourgeois and cosmopolitan lifestyle of the period, draw an imaginary map of the cultural influences from the region and from Europe, point out elements of the kitchen setting and utensils of the period, provide a picture of the foods and spices used at the time and present new curiosities about Maria Cantili Golescu, her family, the culinary objects of the period and the cultural landscape in which she lived. 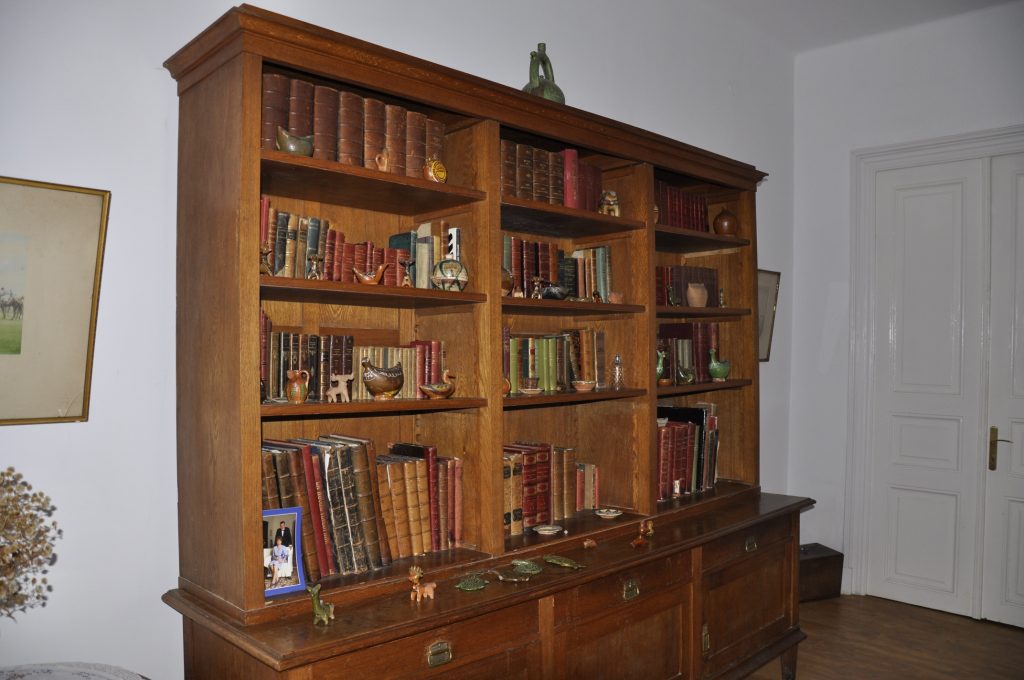 We want to document, structure and creatively enhance the archive of these recipe notebooks of Maria Cantili Golescu, as part of the intangible heritage belonging to the house and the city of Câmpulung Muscel. All the culinary resources thus discovered will be compiled in an online digital document, and some of them will be rewritten and creatively narrated with the help of 10 culinary experts in a recipe book, published both in print and online, accompanied by photo-video materials presenting and promoting each recipe.

The same culinary resources and items from Maria Cantili’s life will also form the basis of a new Honest Goods collection dedicated to these discoveries. Children and adults alike will experience recipes and their associated stories during the project through games, competitions, challenges and hands-on projects.

The project brings together specialists from various fields, enriching the experience in discovering the intangible culinary heritage of Villa Golescu with perspectives such as: the architecture and history of the place and of the Golescu family; the design of culinary objects from the past; the surrounding cultural landscape; local craftsmen and materials; contemporary design; the different methods and dynamics of contemporary and past cuisine; games and practical exercises from the educational sphere; the experience of the competition and the outdoor workshop.

“The Culinary Diary of Maria Cantili Golescu-recipes, tastes, objects and experiments” is a cultural project of Pro Patrimonio Foundation co-financed by AFCN. 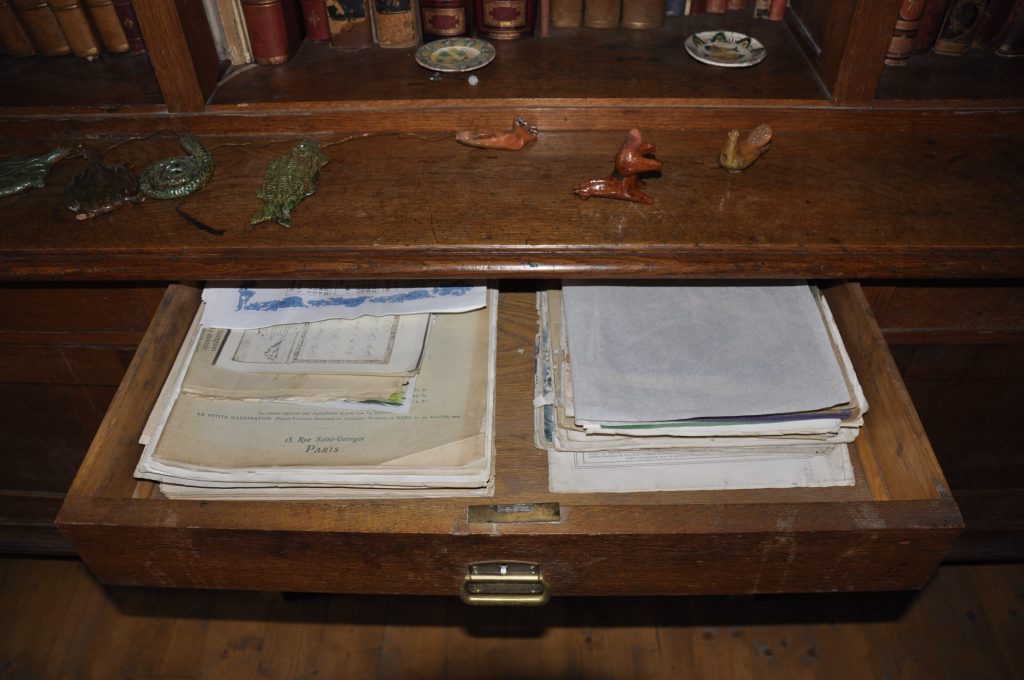 The research project has already started with the creation of a digital archive with all the recipes discovered, in raw format, easily accessible to all those interested, transcribed and translated.

The recipes thus discovered, in their original form, will be archived online in the form of a scanned digital notebook that can be freely accessed by anyone interested on the Pro Patrimonio website.

The recipes will then undergo a selection process with the help of guest culinary experts. Each of them will choose two recipes to explore and adapt and then present them as creatively as possible to their online audience. The selection of recipes will take into account both the preferences of the individual experts and the final content of the Recipe Notebook, which aims to document and bring to the public’s attention a collection of recipes that is as diverse and rich as possible in terms of both taste and the story that accompanies each tasteful memory. Participants will “translate” and transform the language of the notebook notes into recipes with marked ingredients and clear steps to follow for today’s user. The materials will ultimately form Maria Cantili Golescu’s Recipe Notebook, accessible in both print and digital formats.

In parallel with the adult specialists, 15 children will take part in the workshop held in summer at Golescu Villa and will produce their own rewritten Cantili Golescu recipe notebooks. The resulting children’s notebooks will be available in both physical format during the community celebration day and online on the foundation’s website. The children will also create an informal-playful map of the Golescu Villa with the dining places in the house and the old culinary objects to which they will link the documented recipes and their use.

The recipes selected for Maria Cantili Golescu’s Recipe Notebook will be related to the history of Maria Cantili and her relatives from the Golescu family and also documented from the point of view of their origin, their mixed influences (local or European), but also of the way they are served through an original proposal of kitchen objects inspired by them and designed for serving the dishes. The objects will be made in the spirit of the existing Honest Goods collection, using local materials and craftsmen, with projects prepared by two designers. The resulting objects will be featured on the dedicated Honest Goods objects page, each of which will contain the recipe of influence in the presentation.

Depending on the health-related context, the festive day in the community, planned for the autumn period, will host a culinary pickle-making workshop and a gastronomic contest with prizes dedicated to the people in the community — adults or children — who will propose to the participants to try some of Maria Cantili Golescu’s recipes.

The history of the Golescu family is little known from the perspective of female characters, and Maria Cantili Golescu can be a starting point for exploring new characters, using objects, written memoirs, stories or other elements that are part of the discrete family history and the places where they lived. Maria Cantili Golescu’s personality is currently unknown, and the resources of the Golescu Villa offer the opportunity to explore it.

On the other hand, contemporary gastronomy today pays particular attention to reinterpreting recipes from the past and integrating them into menus. Plants used in the past and forgotten along the way are being rediscovered, and influences received over the years from neighbouring countries are being highlighted in the context of more complex cultural exchanges. In this context, the culinary research at Vila Golescu feeds an increased public appetite for such topics and encourages the creation of a more detailed future map of foreign influences received, integrated and reinterpreted in the community.

At the same time, Honest Goods is a collection of objects inspired by Villa Golescu and its surroundings, made with local resources, through the collaboration of local craftsmen and designers. The Honest Goods collection initiated in 2016 is a calling card and an invitation to the place from which it originates and contributes punctually to the maintenance and activation of the house. The special openness to the public shown since its launch until now through participation in national and international fairs and exhibitions and the actual demand for products and novelties, creates the basis for building a new series of objects. In the same spirit, but this time directly inspired by Maria Cantili Golescu’s recipes and linked to the serving of selected menus, the household objects will better highlight both the collection of studied recipes and the crafts and working techniques of the area in relation to contemporary, multidisciplinary approaches and visions.

The Foundation’s continued involvement among children groups in Câmpulung was what made our relationship with the community tighter and earned us the trust of both children and adults. From 2012 to date the Golescu Villa and Park have hosted a particularly diverse series of workshops, events and meetings including: A series of three landscape workshops related to exploring the natural and cultural landscape around Villa Golescu, as well as doing practical work in the garden, from 2012-2017; heritage workshops and multi-annual creative exercises for children from 2014-2018; textile restoration workshops from 2015-2016; culinary landscape workshop in 2016; making and maintaining the Honest Goods collection and the local craftsmen’s map from 2016 to date; the international festival “3 Doors, 3 Countries” in 2018; the “Heritage Education” project with specific workshops related to discovering certain heritage specialists: urban planner, architect, landscape architect, artist and craftsman in 2019; bi-annual workshops dedicated to young people in the community for the last 6 years.

Heritage activities and workshops have thus become an almost indispensable component of any activity at Vila Golescu, an effective means of continuous development and diversification of the public, an opportunity to support the dialogue between children and craftsmen/specialists of all kinds, but also a sure, albeit always unique, way of enhancing the tangible and intangible heritage.

There are already a series of notebooks in the Golescu Villa collection that visitors can use to explore the local natural landscape through trails and local points of interest, the gastronomic landscape from the perspective of an experimental workshop with local elements and French influences, the intangible heritage through the collection of Honest Goods objects, using local craftsmen and materials. 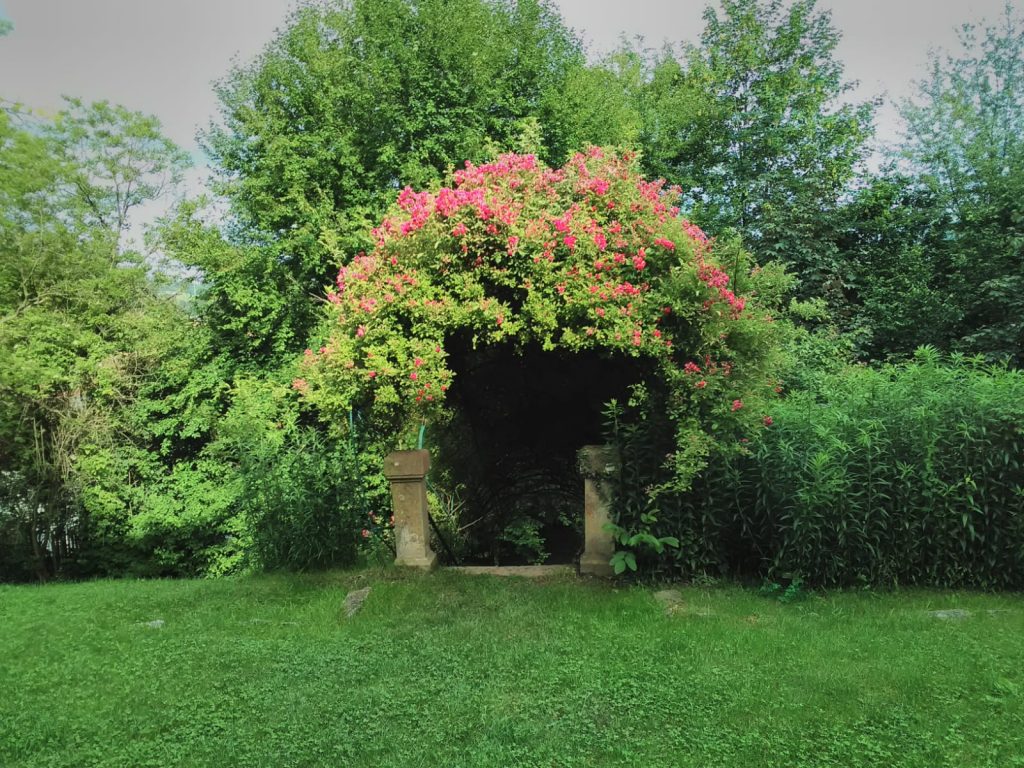 Thus, the Recipe Notebook complementing these proposals, invites an to a sensory exploration of the tastes discovered at the Golescu Villa and an identification of the local and European influences that shaped Maria Cantili Golescu’s life. It also provides an insight into the context of the Golescu family at the time and invites to creating a link between taste, history and utility through the old objects in the house and newly created objects designed to support the culinary act. The alternative discovery map of the house offers the prospect of a playful tour through which the visitor associates places and objects in the villa with the culinary moments of Maria Cantili’s time. 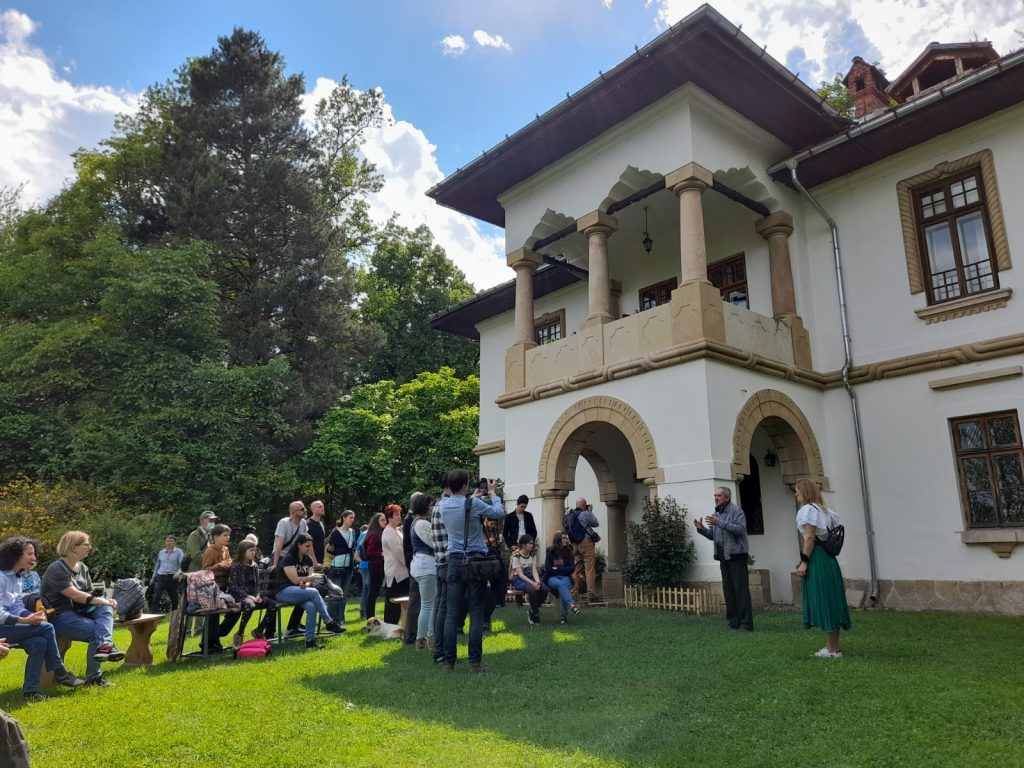