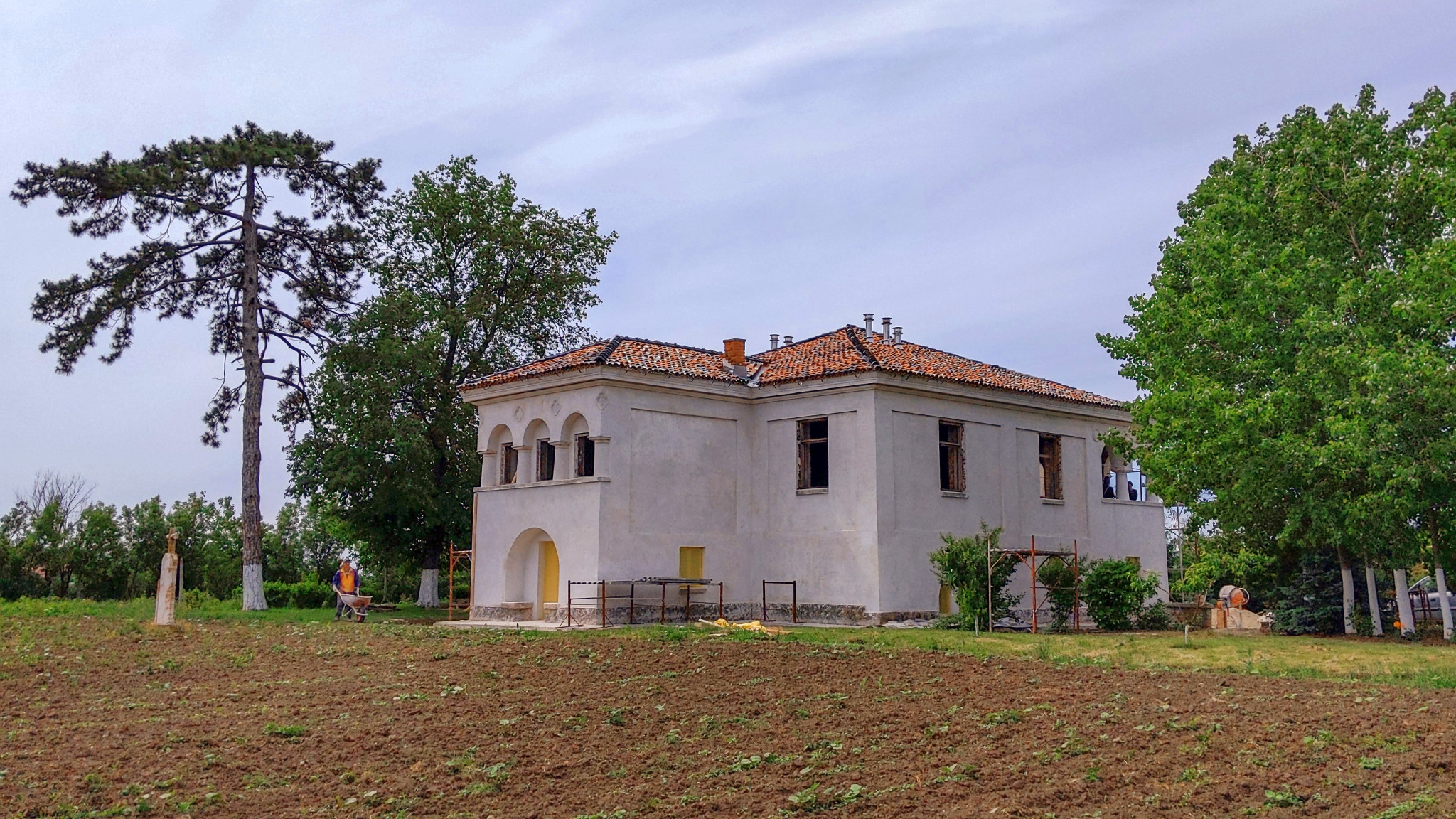 For the start of the construction site at the beginning of April 2021, the mansion windows are being repaired and completed with the carpentry workshop Etrusca srl and the contract for the manor facades has been signed with a company specialized in the restoration, SHK Edificii Casa company.

With the support of funding obtained in the Historical Monument Stamp Tax competition launched by the National Heritage Institute in 2020, we have developed and submitted for approval the projects necessary to obtain the building licence. At the beginning of June 2021 we obtained the Building Licence with no 3/03.06.2021. For the conservation of the Neamțu Manor, Olari Village, Parșcoveni Commune, Olt County and the transformation into an experimental study and education centre, LMI 2015-OT-II-m-B-08968.

Refinishing of the manor facade is progressing. Over the lime plaster the craftsmen noticed a harder thinning layer which helped the drawn profiles to have straight edges. We analysed this layer with the help of the Technical University of Construction to better understand its structure and composition. We will do an on site lime plaster test. Many thanks to Pro Patrimonio France for the cremone bolts sent to Romania, we could no longer find this window closing system here.

Slowly but surely, the manor is already taking on a new life and getting ready for the new meetings with children from the surrounding communities that will take place over the summer.

This week, together with our partners from the UiPath Foundation, we visited the schools around Neamțu Manor and the two communities where 20 children from vulnerable families will soon join the Future Acceleration Program. The secondary school children will receive integrated support to ensure better access to education and will participate in educational activities in the Manor’s courtyard.

During the month of July, facade repair works for the Neamțu Manor continued. After the actual plaster coat was applied, it was finished with a very fine sand lime paint, and the drawn profiles were finished with “ceapac” (a mixture of lime with glue and water macerated for about 10 days). This mixture makes it possible to produce precise and durable edges.

New window frames for the mansion windows have also been fitted. Although most of the original casings have been preserved, their condition is not suitable for fitting new sashes, so it was decided to add new ones to the outside, adding them to the existing ones, which would allow new sashes to be fitted and properly used.

Thanks to spring efforts and support, the manor has a new well, which now allows us to cope with the drought that has already set in. Despite the heavy rains in the country, there has been very little rain in Olari and the land is very dry. Unfortunately many of the seeds planted in the experimental garden started in spring did not germinate (it seems they were too old and the land was not prepared in time), but we have continued to ask around the village which hardy varieties the locals are using, so that in autumn we can better prepare the garden.

From August 2021 Neamțu Mansion has a new look!

At the beginning of August, the SHK Edificii Casa team completed the repairs to the exterior plaster and the installation of the new windows, which complete the existing frames. The decorative profile on the volume of the staircase was also completed with plaster cast elements, elements that were already cast previously with the support of Cella Cosimex, to whom we thank.

With the repair of the facades, the loggia upstairs reopened, allowing us to admire the surrounding landscape.

The drought is as severe as in previous years, most of the experiments started in the spring were fruitless. One kind of colored corn varieties grew and bore weakly. However, the mixture of local pumpkins developed well, covering part of the soil. Those observed this year allow us to make plans for next year for the Experimental Garden.

In September we hosted in Olari the U&I summer camp, organised by UiPath Foundation for the children in Future Acceleration Program, for which Pro Patrimonio provides support. A total of 20 children from two neighboring villages, Osica de sus and Branet, spent a couple of eventful days full of creative and stimulating activities. The movie-worthy aspect of the Neamtu Mansion, complete with its freshly renewed white facade, added to the scenery.

The Pro Patrimonio team in Olt welcomed a new member in their team. Together with the three employees taking care of the mansion, she joins the education branch to support the Future Acceleration Program.

The workshop about heritage education also happened in September, where children from Olari took part right before school started. When it ended, the foundation employees stationed at the mansion started preparing compote cans, thus elevating the local production. The dessert is to be enjoyed by children coming to the mansion next year. The window setup has been finished on the building site and now the mansion is preparing for the cold season by mounting protections during the winter for the beautiful Roman-inspired mosaic lodge situated  upstairs. The experimental mansion garden will also undergo changes during the autumn, so that next spring the land will be ready for farming. We would like to take this chance to thank ROMCIM for their support in completing these activities.

We are also cherishing the recovery of a fountain this month, priorly situated until 1949 in the Neamtu mansion garden. This was moved away during the communist period, but recovered and returned back now in the memory of Mr. Serban Neamtu, the last mansion owner. This tiny bit of success in recovering the lost identity of this place makes past efforts worth it.

In November we showed all the areas previously used tests, thus preparing the garden for next year’s experiments. We intend to continue to test the different varieties of plants useful for a productive garden that can withstand drought.

Thanks to the donation of Mrs. Sînziana Coșeru, the daughter of Mr. Neamțu, the mansion received new pipes and gutters installed very quickly in the last sunny days of December.