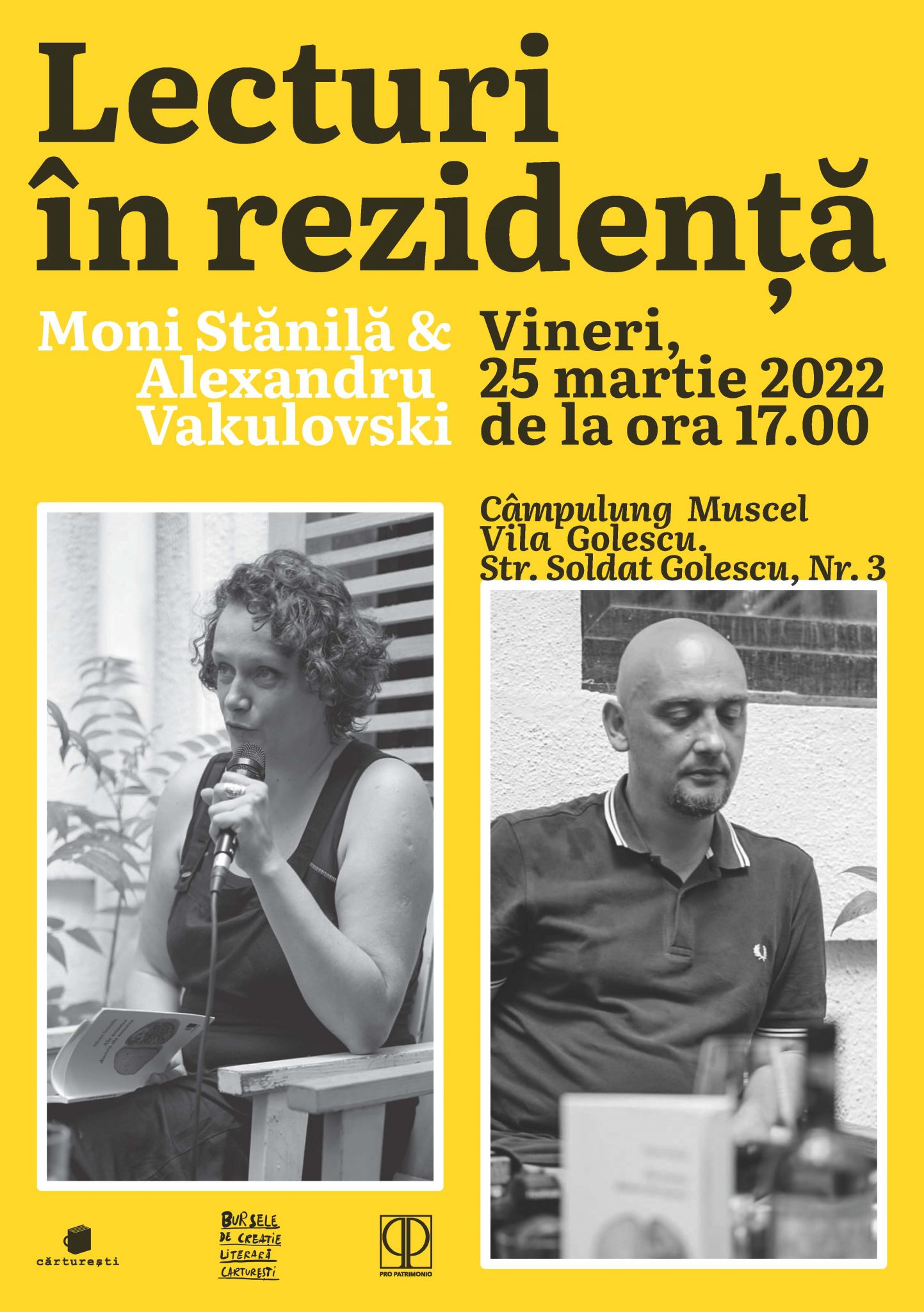 Readings in residence – 25 March at the Golescu Villa

On Friday, March 25, from 17:00 at the Golescu Villa, Soldat Golescu nr. 3, in Câmpulung Muscel, there will be a special reading event, held as part of the Cărturești Scholarships and Creative Residencies programme, with writers Moni Stănilă and Alexandru Vakulovski as guests.

Moni Stănilă is the winner of the 2nd edition of the Cărturești Scholarships and Creative Residencies, in Poetry category, and she performs her creative residency in March, at the Golescu Villa in Câmpulung Muscel, offered with the support of Pro Patrimonio.

With studies in theology and with her poems already translated into English, French, Swedish, Russian, Azerbaijani, but also Catalan, Turkish or Hungarian, among others, with nominations and awards won both in Romania and in the Republic of Moldova for poetry (but not only), Moni Stănilă currently lives in Chișinău, with her husband, Alexandru Vakulovski, and together with him she organizes the Republic Literary Circle of the Municipal Library.

In 2019, in Polirom Publishing House’s collection Fictional Biographies, she published the biographical novel about Constantin Brâncuși Brâncuși or How the Turtle Learned to Fly. And for her fantasy novel for children The Solomonic War, also published by Polirom (junior), she won the Union of Moldavian Writers Award in 2019. The novel Scream as much as you can, her latest publication (Polirom, 2020), is “an autofiction in disguise”, according to Simona Sora.

Alexandru Vakulovski is a poet, novelist, playwright, translator, publicist and screenwriter. He graduated from the Faculty of Letters of the “Babeș-Bolyai” University of Cluj. Together with his brother Mihail Vakulovski and graphic designer Dan Perjovschi he founded the online journal Tiuk!. He was editor-in-chief of Stare de Urgență magazine in 2009 and editor of PLIC magazine – literature, art, attitude in 2010. Together with Moni Stănilă, he directs the Republic Literary Circle of the Chișinău Municipal Library. He published the trilogy Letopizdeț (2002-2007) and the novel 157 steps to hell or Save me at Roșia Montană (2010). His books of poetry include ecstasy (2005), Set fire to books (2012), Sightseeing (2017), Whose house is this (2020). He has also published a volume of interviews, The Afghans (2016), and a children’s book, Ivan Turbincă 2.0. The novel Pizdeț has been republished by Polirom Publishing House (2020) and has been translated into Hungarian (added edition, 2015). Poems and excerpts from his books have been translated into German, English, Czech, French, Swedish, Russian, Azerbaijani, Turkish, Hungarian, Italian, Greek, Lithuanian.

Cărturești Foundation, Maria Association and Pro Patrimonio Foundation Literary Creation Scholarships were born out of the desire to promote and encourage the development of contemporary Romanian literature, starting with the support given to its authors. In a book market dominated by translations, where for most authors, writing is their second, if not third job, the aim of these scholarships and residencies is to give writers the necessary context to devote themselves to writing: time, “a room of their own” and a minimum of external constraints.

Pro Patrimonio was searching models and solutions for cultural heritage, especially architectural heritage, as a socio-economic and environmental resource.  Thus it proposes a productive model of cultural and entrepreneurial activation through the Creative Residency Accelerator programme launched in 2022 for the Golescu Villa. Due to the times we are currently undergoing, the possibility of resilience residencies for Ukrainian artists is open.

Impressions from the residency

“After the residency in Câmpulung Muscel, at the Stefan Golescu House, I feel like telling everyone: you must go to Câmpulung, you must see the Golescu House.

This residency was a joy, even if it happened in a very bad moment (or in a very good one, since I left Chișinău just then). In the first days I couldn’t pull myself together, I couldn’t forget what was happening in Ukraine, it seemed to me that the silence and the beauty of the surroundings hurt me, they made me feel guilty. Then I went to the Church of St. Mina, near the villa, and I calmed down. Gradually, this surrounding beauty overcame me. Within only three days I was writing with vigour. In the breaks I tried to do some research on the past of the house, but also regarding the Golescu family (returning, however, hour by hour, to Ukraine, Basarabia, the cruel reality).

I will remember for years to come the portrait of Nicolae Golescu in the living room, painted by George Demetrescu Mirea, as you remember a friend. The terrace, with the view over the city; the dendrological park; the dogs and seagulls roaring in the night; our dear Lăbuș / Muscel whom I want to see again, Sergiu and Ioana whom I know I will see again and whom I have definitively fallen in love with; the discretion and attention of Mrs Lucica; the Mățău peak and the Păpușa mountain – all will be reflected in my next volume.

A volume from which there will not be missing – unfortunately – the war, which has accompanied me like a skin disease that you can only forget about when you don’t look at yourself.”

Details and poems on the Cărturești Blog

We enjoyed the presence at the Golescu Villa of the editors of the local TV station Muscel TV, who helped us catch a bit of the local atmosphere https://fb.watch/c74zyf1dat/ 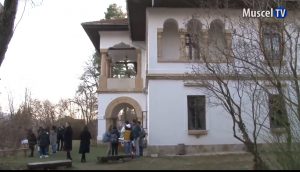 Cărturești is the first concept bookstore in Romania, opened at the end of 2000 and committed to a new experience of buying and promoting books and cultural products. Now the largest bookstore chain on the Romanian market, Cărturești has 39 locations that redefine the idea of a bookstore. Among the brand’s flagship bookstores eare Cărturești Carusel, included in The Telegraph’s list of the most beautiful bookstores in the world, Cărturești Verona, the largest space dedicated to reading and book offers in Bucharest, and Cărturești Modul, a visual culture bookstore that also features an indoor garden, a contemporary art gallery and a café.

Maria Association (Țibănești) is a non-profit organization opened in 2000. The president of the organization is the architect Șerban Sturdza. Maria Association’s activities are carried out in the Țibănești commune, Iași county. Since 2006, a cultural programme titled Hit the iron at the manor has been organised at the Petre P. Carp mansion in Țibănești! The programme includes a series of workshops on traditional crafts and experimental techniques and is coordinated by the Maria Association in partnership with the Pro Patrimonio Foundation. All the activities grouped around the P.P. Carp manor house constitute a school of handicrafts, intended primarily for the local people of the Țibănești area, but also for all those who are aware of the value of cultural heritage and the need to pass it on to their descendants. The Petre P. Carp historical ensemble of national importance in Țibănești consists of a manor house, a church, a mausoleum and an annex building.

Pro Patrimonio Foundation is an international non-profit non-governmental organisation with branches in Romania (Bucharest), UK and France. Founded in 2000, the Foundation runs a series of projects whose main mission is to preserve, save and revive cultural heritage, especially architectural heritage. Actions focus on practical heritage protection and rehabilitation projects, as well as community involvement and awareness of their own identity, memory and the value of cultural heritage.

The Golescu Villa, located in Câmpulung Muscel at the foot of the Carpathian Mountains, is an architectural and landscape ensemble unique for the diversity of elements found here. This charming residence was built in 1910 and is a fine example of the Neo-Romanian style, with Albești stone window frames, a well-proportioned porch and harmonious, simply decorated arches. The villa is also used as a venue for cultural events, seminars, readings and launches.

The Golescu Villa, located in Câmpulung Muscel at the foot of the Carpathian Mountains, is an architectural and landscape ensemble unique for the diversity of elements found here. This charming residence was built in 1910 and is a fine example of the Neo-Romanian style, with Albești stone window frames, a well-proportioned porch and harmonious, simply decorated arches. The villa is also used as a venue for cultural events, seminars, readings and launches.