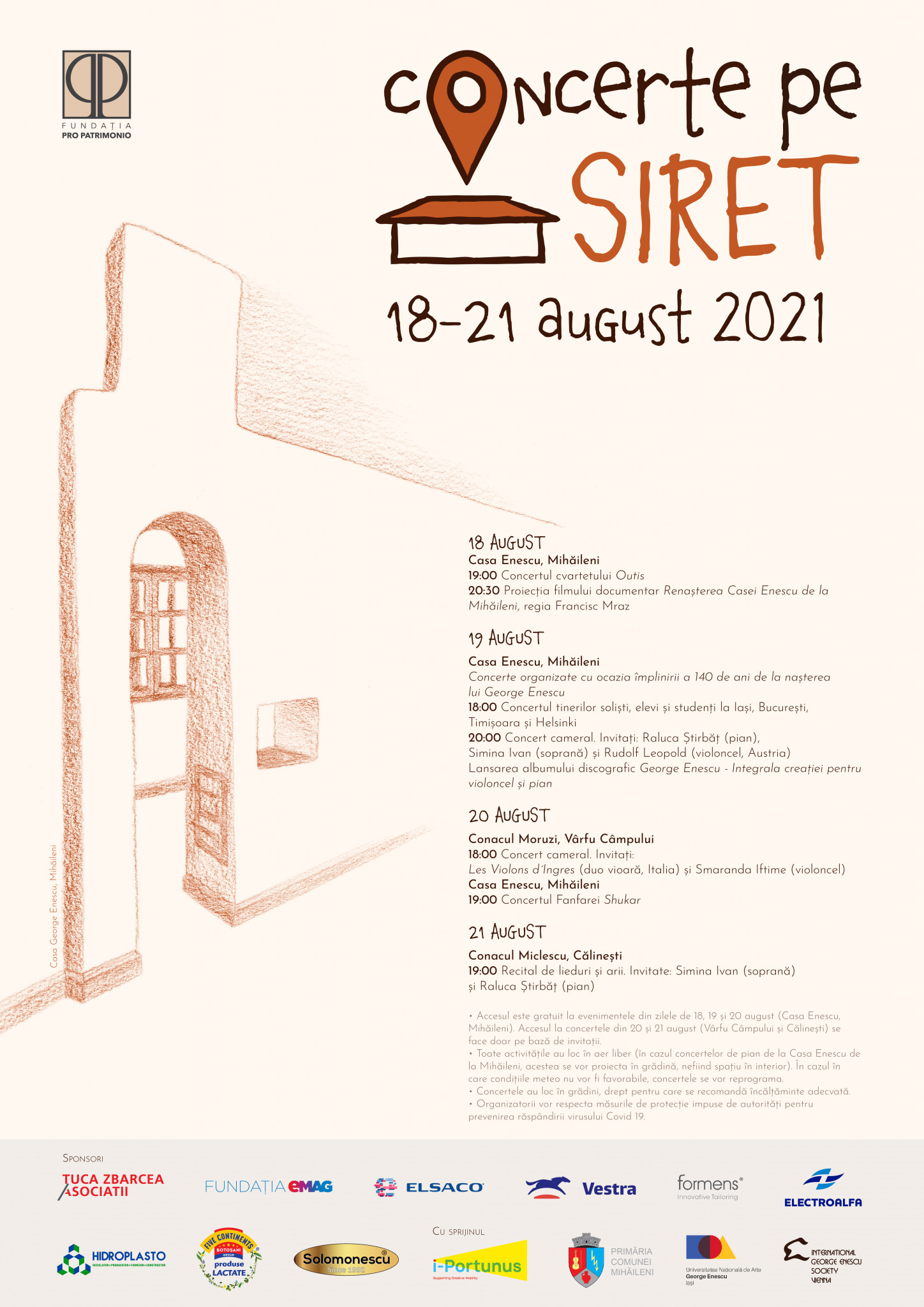 From the 18th to 21st  August, 2021, Pro Patrimonio Foundation launches the first edition of the event “Concerts on the Siret River” which will take place in area north of the Siret River, Botoșani County. This year the concerts will take place at the George Enescu House in Mihăileni, the Miclescu Mansion in Călinești and the Moruzi Mansion in Vârfu Câmpului. “Concerts on the Siret River” wishes to become an annual project, increasingly broad in terms of cultural offer, venues, notoriety, types of events and aims to attract a regional, national and foreign audience for a sustainable development, based on the local values and tangible and intangible heritage. The beauty of nature, the diversity of the architectural heritage, and the traditions of the region can support the development of rural areas and place them on the tourist, economic and cultural map of Romania.

The concerts will be performed by pianist Raluca Știrbăț, president of the International Society “George Enescu” in Vienna, initiator and supporter of the project to save George Enescu’s house in Mihăileni, cellist Rudolf Leopold (Austria), soprano Simina Ivan (Austria, Romania), the OUTIS Quartet, the violin duo Les Violons d´Ingres (Italy), Smaranda Iftime (cello) and the Shukar Fanfare (Romania). A special concert will be performed by young soloists, students of music colleges and universities in Iași, Timișoara, Bucharest and Helsinki. The project will include a screening of the documentary film “The Rebirth of the Enescu House in Mihăileni”, directed by Francisc Mraz.

The concerts are dedicated to the memory of George Enescu, celebrating 140 years since his birth.

The concerts aim to integrate the Enescu House in Mihăileni into the local and national cultural and educational circuit. During the chamber music concert on 19 August at the Enescu House, the album George Enescu – Complete works for cello and piano will be launched, which has just been released by the Viennese label Paladino music, featuring Rudolf Leopold and Raluca Știrbăț.

“To the north of the Siret River lies collection of elements that do not realize their own value. After doing a study on the development of tourism in Moldova, we found that the values of these places are more diverse and complex and that an overview could strengthen the cultural fabric of the area. This gave rise to the idea that music together with the cultural landscape could be coagulating elements, an important concept that Romania is trying to develop in all heritage policies. Music, architecture and cultural landscape are beginning to link a territory in which communities and people become effective actors. This led to the solution that Pro Patrimonio, who owns the Enescu House and has restored it, should create together with the people of the community, the town halls and local personalities a meeting point which the pandemic has complicated. What we initially thought of as a punctual and broad event had to be divided and transformed it into a triple event under the title “Concerts on the Siret River” over four days, fifty kilometres, from Mihăileni to Vârfu Câmpului and Călinești” said Șerban Sturdza, President of Pro Patrimonio Foundation.

“A chic little town and cosmopolitan border point of the Austrian Empire, Enescu’s Mihăileni preserves memories and moments more than precious, even decisive for the composer’s destiny. Built in the mid-19th century by his maternal ancestors – the distinguished Cosmovici family of priests and intellectuals, men with remarkable musical interests – the house once belonged to an economic and cultural area of great effervescence which is hard to imagine from our present perspective. The Pro Patrimonio’s “Concerts on the Siret River” project aims – by combining heritage and cultural-educational actions, where music plays a central role – to revitalize this region by attracting and involving local communities and start acting by raising awareness in the extremely complex and diverse potential of this region. We look forward to a large and enthusiastic audience, as well as supporters and donors who we are convinced will understand the value of a space with unique values in the Romanian landscape and beyond” said pianist Raluca Știrbăț, President of the International George Enescu Society Vienna.

“Concerts on the Siret River.” Program

Premiere screening of the documentary film “Renaissance of the Enescu House in Mihăileni”, directed by Francisc Mraz.

Launch of the album: George Enescu – The complete works for cello and piano

The programme of the two concerts will include works by George Enescu, Béla Bartók, Franz Liszt, Serghei Rahmaninov, Claude Debussy.

George Enescu’s house in Mihăileni, Botoșani county, a historical monument owned by Pro Patrimonio Foundation, was saved from collapse and underwent a seven-year restoration process. This is where the composer spent his childhood and adulthood, completing many of his masterpieces. It was the last place he visited before leaving the country for good in September 1946. The house belonged to George Enescu’s mother, Maria Cosmovici, and was built by her parents most likely in the mid-19th century. Today, the house is given back to the local community as a cultural and educational centre. In 2020 the restoration works were completed, a moment marked also by the inauguration of one of Pro Patrimonio Foundation’s most ambitious projects, the “Academy for the Study of Music and Sound”.

The duo “Les violons d´Ingres” was born in 1997 from the meeting of violinists Claudia Cancellotti and Erica Scherl, both students of maestro Enzo Porta. Since then, the duo has performed in various Italian and foreign cities such as Bologna, Florence, Perugia, Windhoek, Jerusalem, Ramallah and others. The participation of the two musicians is due to the support received from the European I-portunus programme.

The Moruzi Mansion in Vârfu Câmpului is close to the Siret River and is set in a park-like courtyard made up of a natural reserve of ancient oak trees. The beauty of the place is quite special and can create a unique setting for cultural events: concerts, workshops, conferences.

The Shukar Fanfare from the village of Zece Prăjini, Iași, has distinguished itself by its specifically Balkan tones, the musical style being associated with that of Goran Bregovic. In 1993, the band’s music was launched abroad by the former sovereign of Romania, Michael I, visit to Montreux. With over 25 years of activity, under the guidance of the leader Costică Panțîru, the band members have travelled all the continents, giving concerts in Europe, Asia, America, and even being for a period (2006 – 2009) employees of the Zingaro Theatre in Paris. They can boast of tours in Hong Kong, Tokyo and Brussels.

The Miclescu Ensemble from Călinești is, at this moment, probably the most authentic restored manor house in Romania, a model of relationship with the local community. The manor was a model of a modern agricultural farm and one of the oldest and most beautiful manor houses in Romania during the interwar period. Nationalised and destroyed after the advent of communism, the manor was recovered by its direct descendant, Mr. Radu Miclescu, and restored with care and dedication. For 15 years, the Miclescu Manor has become a unique artistic space, a successful agricultural farm, an educational restoration site, a welcoming place after its inauguration for intellectuals, artists, journalists and politicians. The social and philanthropic imprint of the Miclescu family also extended to the church at Cervicești and, in general, to the local community, for which it created jobs and provided aid in various forms.

On August 18, 19 and 20, from 18.00 and until the end of the events of each evening in the garden of Enescu House in Mihăileni, Cărturești Bookstore will organize a book stand from which books of literature, architecture, music, art and children’s literature can be purchased.

Concerts on the Siret is a project initiated and designed by Pro Patrimonio Foundation.

Pro Patrimonio Foundation has been intervening for over 20 years in almost all regions of Romania to revitalise and strengthen disadvantaged communities remote from areas of progress. The aim is to re-establish community identity links for a built heritage that is currently abandoned, has lost its role, and, as far as possible, to reintroduce it into the economic and cultural circuit. Actions focus on practical education projects, aimed at rehabilitating and re-functionalising the historic heritage, as well as community involvement and awareness of their own identity. As a non-profit non-governmental organisation with branches in Romania, UK and France, the Foundation runs projects designed to save heritage, educate and raise awareness regarding the importance of cultural heritage.

Read also How our “Concerts on the Siret River” were