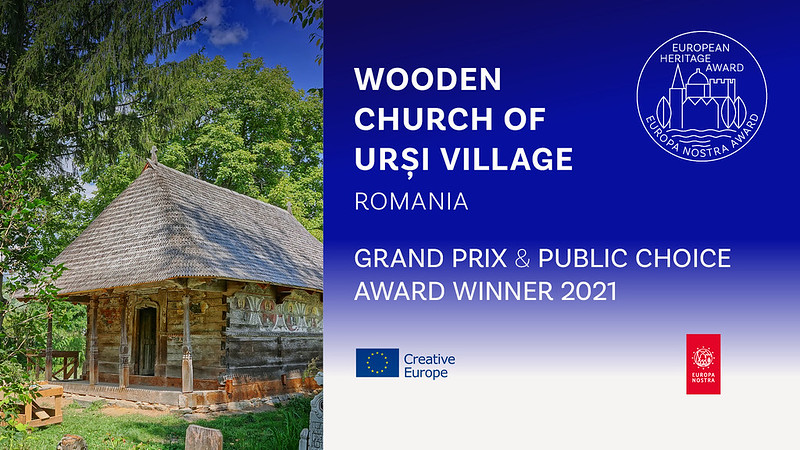 The winners of the 2021 European Heritage Awards / Europa Nostra Awards, Europe’s top honour in the field, were celebrated this afternoon with a high-profile ceremony held at the headquarters of the Giorgio Cini Foundation in Venice. During the ceremony, representatives from the European Commission and Europa Nostra proudly announced the four Grand Prix laureates and the Public Choice Award winner, which were selected from among this year’s 24 winning achievements from 18 European countries. Due to the safety precautions against COVID-19, the European Heritage Awards Ceremony 2021 was held for some 220 attendees, but was followed live by hundreds of heritage professionals, volunteers, lovers and supporters from across Europe and beyond. The ceremony is among the highlights of the European Cultural Heritage Summit 2021 that is taking place from 21-24 September in the World Heritage City of Venice.

The 2021 Grand Prix laureates are:

The Grand Prix laureates, chosen by the Board of Europa Nostra on recommendation by an independent jury of experts, will receive €10,000 each. (Read below to learn more about these outstanding European heritage achievements that received a Grand Prix).

The remarkable rehabilitation of the Wooden Church of Urși Village (Romania) is the big winner of 2021: it received a Grand Prix and the general public selected it as their favourite heritage project in Europe. Some 7,000 citizens from all over Europe voted for the Public Choice Award online via the Europa Nostra website.

“I warmly congratulate the impressive winners of the European Heritage Awards / Europa Nostra Awards 2021 for their success and remarkable contributions to our Europe of Culture. The far-reaching impact of the winners illustrate the invaluable contribution of Europe’s cultural heritage to our society, economy and the environment. At a moment when Europe is determined to build back better, these success stories are a true inspiration and a powerful example of what we, as Europeans, can achieve together despite the challenges we are faced with. I hope these Awards will help your excellent projects thrive and play an even more important role in the recovery of our Europe,” said Mariya Gabriel, European Commissioner for Innovation, Research, Culture, Education and Youth.

In a congratulatory message, David Sassoli, President of the European Parliament, stated: “I would like to congratulate the 24 winners of the European Heritage Awards / Europa Nostra Awards 2021. Each of you has made a contribution to the protection, enhancement and promotion of our rich cultural heritage and to the common building of Europe’s future. The European Green Deal, our external relations, the future of Europe naturally pass through our identity. So, let me express my appreciation and thanks for your commitment.”

“After such a long time of being physically apart, it has been an immense joy to meet and celebrate our Award winners in the iconic monastic complex of the Giorgio Cini Foundation on the island of San Giorgio Maggiore in Venice. Each one of our winners compellingly demonstrates the potential of our shared cultural heritage to help build a more resilient, more inclusive and more beautiful Europe. On behalf of the large Europa Nostra family, I wholeheartedly congratulate our laureates for being the proud recipients of Europe’s top honour in the heritage field. May these Awards be stepping stones to upscale your success and inspire heritage professionals and enthusiasts in Europe and beyond,” stated Prof. Dr. Hermann Parzinger, Executive President of Europa Nostra.

During the ceremony, the two winners of the ILUCIDARE Special Prizes 2021 were also unveiled:

1) HAP4MARBLE − Marble Conservation by Hydroxyapatite (Italy), for excellence in heritage-led innovation; and

The winners of the ILUCIDARE Special Prizes were selected by the ILUCIDARE Consortium, including Europa Nostra, from among the submitted applications to the European Heritage Awards / Europa Nostra Awards 2021. ILUCIDARE is a project funded by Horizon 2020 with the aim of establishing an international network promoting heritage as a resource for innovation and international relations.

The local community of the small village of Urși worked with many experts and volunteers to recover this beautiful 18th century wooden church for generations to come. Interdisciplinarity and international cooperation has secured the church’s future and reinvigorated its remarkable painted decorations.

The church, dedicated to the Annunciation and the Archangel Michael, was built between 1757 and 1784. Though it survived a fire in 1838, after which it was repaired and decorated with frescoes, the church was later abandoned. On its rediscovery in 2007, the church lay without a foundation and was at risk of collapse. The frescoes, painted in the Post-Byzantine tradition with Western influences and of remarkable artistic value, faced serious decay.

From 2009 to 2020, the restoration works took place each summer following months of fundraising efforts in the preceding year. The main partners involved were the Pro Patrimonio Foundation, the Art Conservation and Restoration Department of the National Arts University of Bucharest, the ASTRA Museum of Traditional Folk Civilization, the National Institute of Physics and Nuclear Engineering “IRASM”, the National Chamber of Romanian Architects, Asociația 37 and the owner of the church, the Romanian Orthodox Church. The funding for the project was provided by the International Music and Art Foundation, the World Monuments Fund, the Headley Trust, Holcim Romania, online crowdfunding and the European Investment Bank Institute along with several private donors.

This project investigated the fibres used in textile production in Europe from prehistory to the Roman Empire and created a tool that can be used to aid European textile studies. The Open Access database FIBRANET provides information on diverse textile fibres and is supported by bibliographical information and data on how these are affected in an archaeological burial context. This innovative research has deepened knowledge in material analysis of ancient fibres and revealed information on fibres that had never been studied before. This new knowledge on how textiles deteriorate will also inform European policy on tackling the negative environmental effects of textile waste.

FIBRANET was carried out in partnership with 8 institutions: CTR/UCPH, the host institution; Core Facility for Integrated Microscopy (CFIM/UCPH), the Directorate of Conservation of the Hellenic Ministry of Culture, the School of Conservation of the University of West Attica, the National Centre for Scientific Research (NCSR) “Demokritos”, the American School of Classical Studies in Athens, the Danish Royal School of Conservation and the University of Warsaw, for the dissemination of outcomes through workshops and other educational activities. As a Marie Skłodowska-Curie action, the project was funded by several EU mechanisms.

The Technical Committee on Cultural Heritage was established in 2008 by the Greek Cypriot and Turkish Cypriot leaders under the auspices of the United Nations. It has restored over 70 monuments of great historical, archaeological and religious importance, such as the famous monastery of Apostolos Andreas in the Northern part of Cyprus, the Othello Tower and the city walls of Famagusta. The Committee’s work centres cultural heritage as a powerful tool for peaceful cooperation and for the creation of a climate of reconciliation.

The education of younger generations of Cypriots has been central to the mission of the Committee. An interactive educational programme, including site-visits of ongoing conservation work, gives young people the opportunity to share in the knowledge and experience of restoration experts. More than 2,000 participants have taken part in guided tours to ongoing projects or attended presentations organised by Committee members.

In support of its relentless efforts, the Committee has received funding mainly from the European Union, but also from other donors, such as the Church of Cyprus, the EVKAF Administration, the USAID, the Holy See, the A.G. Leventis Foundation and local funding, channelled through the UNDP, which also offers technical assistance and oversees the implementation of the projects.

The Invention of a Guilty Party, Trento, ITALY

In 1475, Trento was witness to the death of two-year old Simone resulting in the conviction of three Jewish families for ‘ritual murder’ on the basis of confessions obtained under torture and strenghtend by anti-Jewish propaganda. Simonino da Trento was subsequently worshipped as a martyr well into the mid-20th century. However, the re-examination of the court documents in 1965 led to the Church’s abolition of the cult.

The exemplary exhibition The Invention of a Guilty Party: The case of little Simone of Trento from propaganda to history sheds light on this historical episode that left a deep mark on the history of Trento. The work admiringly stimulates critical reflection on the construction of a hostile “other”; the spread of intolerant behaviour towards people of differing race, religion or culture, stoked by prejudice and stereotypes; and the power of propaganda and fake news.

The exhibition was organised by Museo Diocesano Tridentino and is based on extensive research in collaboration with the Dipartimento di Lettere e Filosofia, the Facoltà di Giurisprudenza of the University of Trento, the Archivio Diocesano Tridentino and the Fondazione Museo Storico of Trento. The project was funded by the Autonomous Province of Trento, the Fondazione Caritro and the Comune di Trento.

The European Heritage Awards / Europa Nostra Awards were launched by the European Commission in 2002 and have been run by Europa Nostra ever since. This Awards programme has the support of the Creative Europe programme of the European Union. The Awards highlight and disseminate heritage excellence and best practices, encourage the cross-border exchange of knowledge and connect heritage stakeholders in wider networks. The Awards bring major benefits to the winners, such as greater (inter)national exposure, follow-on funding and increased visitor numbers. In addition, the Awards programme fosters a greater care for our shared heritage amongst Europe’s citizens. The Awards are therefore a key tool to promote the multiple values of cultural and natural heritage for Europe’s society, economy and environment. For additional facts and figures about the Awards, please visit www.europeanheritageawards.eu/facts-figures.

Europa Nostra is the European voice of civil society committed to safeguarding and promoting cultural and natural heritage. A pan-European federation of heritage NGOs, supported by a wide network of public bodies, private companies and individuals, it covers more than 40 countries. Founded in 1963, it is today recognised as the largest and the most representative heritage network in Europe. Europa Nostra campaigns to save Europe’s endangered monuments, sites and landscapes, in particular through the 7 Most Endangered Programme. Europa Nostra actively contributes to the definition and implementation of European strategies and policies related to heritage, through a participatory dialogue with European Institutions and the coordination of the European Heritage Alliance. Europa Nostra was the EU’s key civil society partner during the European Year of Cultural Heritage in 2018. It also figures among the first official partners of the New European Bauhaus initiative recently launched by the European Commission.

Creative Europe is the EU programme that supports the cultural and creative sectors, enabling them to increase their contribution to jobs and growth. With a budget of €2.4 billion for 2021-2027, it supports organisations in the fields of heritage, performing arts, fine arts, interdisciplinary arts, publishing, film, TV, music, and video games as well as tens of thousands of artists, cultural and audiovisual professionals.

ILUCIDARE is a European Union funded project which promotes heritage as a resource for innovation and international cooperation. This project has received funding from the European Union’s Horizon 2020 research and innovation programme under grant agreement No821394.

The ILUCIDARE Special Prizes, awarded within the European Heritage Awards / Europa Nostra Awards, aim to demonstrate that cultural heritage is a powerful resource for strengthening international exchange and collaboration and driving innovation-led sustainable development. Being co-funded by the Creative Europe and the Horizon 2020 programmes, the ILUCIDARE Special Prizes are a concrete example of how synergies can be built among EU programmes to enhance their impact.