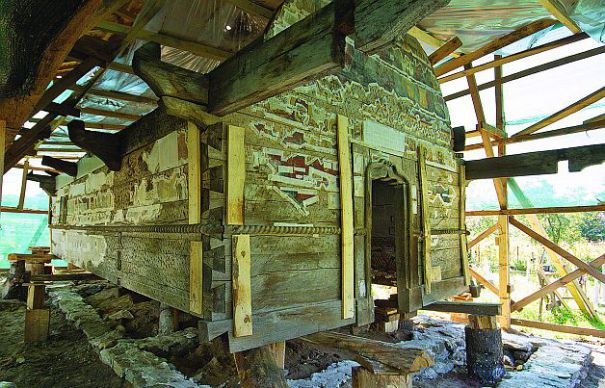 In the case of the wooden church in Urși, Vâlcea County (1784), several major problems with the roofing, structure and foundation have been noted as well as the mural painting that is in a fragile condition. On 12 June 2010 the altar vault caved in, a reason for the Order of Architects and Pro Patrimonio Foundation to step in and, with donations and voluntary work, build a structure to shield the church, dismantle the rotten roof and, together with Prof. Dan Mohanu and students from the National University of Fine Arts in Bucharest consolidate the frescoes. Architects Ștefan Bâlici and Virgil Apostol voluntarily drew the restoration project for the church in Urși.

Since 2010 an ample restoration worksite has been underway and it includes conservation of both interior and exterior frescoes. The works are done with the help of the local community that wishes to see the work finished and the church reopened for daily use as well as for tourist visits. The restoration work in progress since 2013 is being done with the support of the international organization World Monuments Fund.

In the case of the small wooden church in Urși, the museum inaugurated in 2014 on Watch Day is located in a room in the village kindergarten and comprises damaged elements that have been replaced, pictures taken during the restoration works, and explanations about techniques, painting and the value of the church. In the case of Urși, one of the successful projects in progress, the local priest and mayor have given a great deal of support to the project.

The church in Urși was built between 1757-1784 by founders Ion Danciu and Constantin the priest. After the fire in 1838, the church was repaired and painted inside and outside in 1843 by craftsmen Gerghe, Nicolae and Ioan . In 1913 a new brick church was built in town leaving the wooden church to serve as cemetery chapel. The last repair was done in 1943.

Violin recital held in 2013 by Alexandru Tomescu in the wooden church in Urși for raising funds necessary for restoration works.