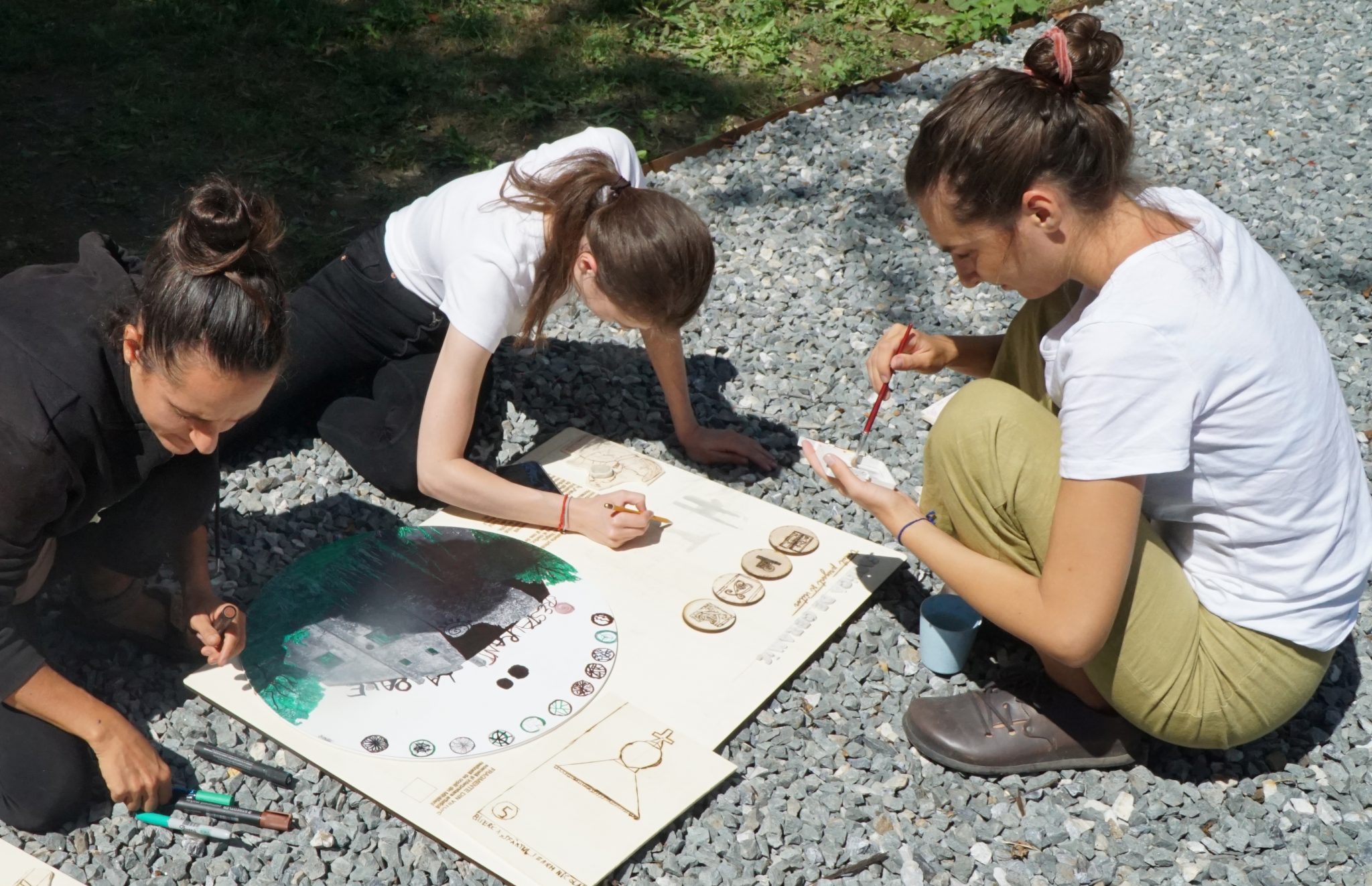 ”The story of my city” – Workshop Diary from the Enescu House

During the five days of the Heritage Caravan workshops at the Enescu House in Mihăileni together with the team of children involved we researched the subject “How do we discover and creatively tell stories about the place we live in?” We had very intense work days, but with much satisfaction at the end for both the children and the inhabitants of Mihăileni.

The first day was dedicated to establishing the clues for Mihăileni. Each of the 22 participating children from the village earned one of the Mihăileni clues, “fought” as a warm-up for the history fragments by participating in fun and sporty team games. The elements of the village were then redrawn by the children in the context of history and the future they themselves imagine.

All these elements were then put together in a DIY frame book by the children, through which they learned an ancient Japanese bookbinding technique. The creations and other complementary textiles were finally personalised with linocut stamps.

Outdoor games and board games rounded off the autumn-tempered afternoon at the Enescu house.

The second day of workshops followed the theme and resource already developed last year in the Enescu Workbook – available in the Foundation’s free resource library. The previously created “on foot” route round Mihăileni was brought to life this year with a dynamic circuit with marker posts and interactive panels at the most interesting points of the village.

The children have worked hard to create four complex panels dedicated to the past, present and future of the Enescu House, the Zahacinski Museum, the former Town Hall and the Ceramics Factory.

The other destinations of Mihăileni were thus enriched with small wooden signposts to be mounted on the site.

On the third day we received new friends. Actress Irina Artenii defied the tiring Bucharest-Mihăileni distance and came for a short but intense workshop. The children got behind the curtains and played in like young actors. The end of the games gathered all the energies in a series of mini skits with secrets they couldn’t seem to get enough of.

The shadow theatre in the second part of the workshops was not only a new and novel experience for everyone but also an opportunity to create our models for the following day’s filming.

There was much laughter and applause at the end of the four teams’ scenes.

Getting ready, editing and filming!

The most excitement was probably reserved for this day, the fourth of the educational workshops in Mihăileni. With minimal training by our friend Alin Iacob and some home-made exercises, the four team coordinators became for one day directors and responsible for editing four short films with the enthusiastic teams of child actors, already prepared the day before for the audience and the camera.

Each of the four chosen locations — the George Enescu House, the Former Town Hall, the Zahacinski Museum and the Ceramics Factory — were creatively, playfully and amusingly told from the perspective of the past, the present and the future imagined by the children themselves.

Costumes were assembled, metaphors were written, recordings of voices, music and old objects collected by the children, all to tell the story of a series of places we all want to continue living for the benefit of the community.

All the videos can be accessed online on the Pro Patrimonio Foundation’s You Tube channel as well as next to each storyboard created by the children, via an attached QR code.

The last and probably the most loved day of the Heritage Caravan was the day dedicated to sports and culinary competitions, exhibition of works and film evenings.

We made the tour of the 20 landmarks on the Mihăileni Map – also available online https://me-qr.com/4037478 – with the whole group of children, mounting the signposts they themselves had made.

The award ceremony was attended by parents. They too came prepared for the cooking competition. Tensions were high, as they are every year, when the votes were counted.

The film evening started with the 4 creations of the children and trainers and continued, in the spirit of the caravan, with a screening of the animated film accompanied by pizza and lots of good cheer.

The feedback notes collected urgently send us back to the community to continue our work in the future, with the children unanimously confirming that they love the proposed activities and want more. And having said that, all the fatigue gathered in preparing and organizing the camp pales when compared to the joy and fulfilment of doing things of real use to the community, in the spirit of discovery and creative transformation of tangible and intangible heritage.

None of this could have been done without the phenomenal help of the trainers and volunteers involved on time and throughout all of this year’s truly demanding activities. So special thanks:

– Ana Maria Apostoiu – for her dedication, for being with us for years and for being the fastest trainer-raiser we know

– Răzvan Bogză – for his creativity, inventiveness and integration into the team as if we had known each other all our lives

– Ruben Mardaru – for his openness, competitive spirit in all activities, hard work to make things go according to plan and continuous involvement in the management of the Enescu House

– Cosmina Manolache – for her perfect integration in the team and in the spirit of Pro Patrimonio activities, professionalism and open-mindedness

– Delia, Teona and Carmen for their punctual involvement

In order to signpost the route for discovering the town of Mihăileni, we had the agreement of the Municipality of Mihăileni. This route has been mapped and narrated since last year in the George Enescu House Notebook, available online  bit.ly/3PIAoW5 and bit.ly/31OQSYA

We thank UiPath Foundation for the partnership and trust it has shown for three years in supporting educational programs and caring for the heritage object, the George Enescu House in Mihăileni.