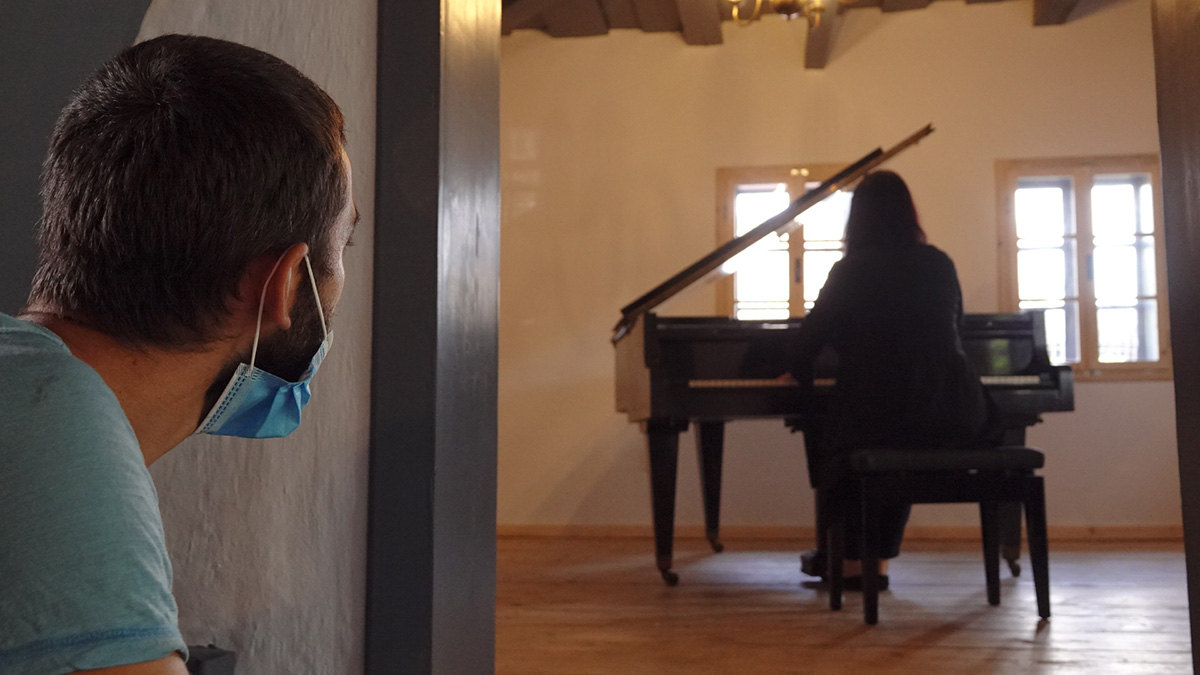 Inauguration concert for the Enescu House from Mihăileni

After 7 years from the signaling of the emergency situation, the restoration site of the George Enescu House in Mihăileni ends, and the house will be inaugurated with a piano recital by pianist Raluca Știrbăț. The concert is dedicated to the supporters of this project and to the memory of George Enescu, whose birth marks 139 years today.

The inauguration concert of the George Enescu House in Mihăileni will take place on August 19, at 7.30 pm. Pianist Raluca Ştirbăţ, president of the “George Enescu” International Society in Vienna, will perform for a small audience in the house courtyard. In 2013 she reported the disastrous situation of the composer’s mother’s house, Maria Cosmovici, and made efforts to classify it as a historical monument in November 2014 (LMI code BT-IV-m-B-21063). Subsequently, the Order of Architects of Romania (Bucharest and North-East branches) and the Remember Enescu Foundation, whose president is the violinist Alexandru Tomescu, joined forces to responsibly save a landmark of major importance for our national identity and European cultural heritage.

The rescue project of the Enescu House in Mihăileni started and continues as a common effort, in which private entities, individuals and legal entities, support financially or in nature the entire restoration effort. From 2014 until now, Pro Patrimonio Foundation has held over 15 events and charity concerts in Vienna, London, Paris, Iași and Bucharest. In November 2019, the Enescu house became the cause for the Ball of the Romanian nobility and friends, thus financing the continuation of the construction site.

The Pro Patrimonio Foundation became the sole owner of the monument through the donation of a third of the house made by Dr. Ștefan Botez, successor of George Enescu, and through the direct acquisition of the rest of the house, money also obtained from private donations

Following the general policy of the foundation carried out over the 20 years, the rescue interventions of a monument were constantly done together with for the local community. As in the case of other Pro Patrimonio projects that are living spaces used for cultural or educational purposes by the local community (example Vila Golescu from Câmpulung Muscel, Wooden Church from Urşi, PP Carp Manor from Ţibăneşti, etc.), and in the case of the George Enescu house from Mihăileni, we carry out the same locally adapted procedure. Following the development of the partnership with UiPath Foundation, we have developed a music education program dedicated to children from neighboring local communities.

The integration of the George Enescu House from Mihăileni in the cultural and educational circuit is done through the Children’s Academy for Music and the Study of Sound “George Enescu” from Mihăileni, which aims to function as a center of excellence. It will bring together both the memorial component and the music education component, hosting residencies for people involved in artistic creation, music research. Adjacent spaces in the vicinity of the memorial house will accommodate young students and visitors. The education module, the Children’s Academy for Music and the Study of Sound, developed in partnership with the UiPath Foundation, is part of this broader program and will involve children in the area, giving them the chance for quality education and a unique cultural environment close to families and their households

The piano belonged to Mircea Vulcănescu and is a donation with traceability in documents. The instrument, a Bösendorfer from 1928, was refurbished in Bucharest and used, over time, by several musicians, among others, Dinu Lipatti and Johnny Răducanu.

The concert will be presented with the support of TVR Iași and the team led by Gabriela Baiardi, loyal supporters of the Enescu House cause in Mihăileni.

Thoughts at the inauguration

“A beautiful project is just beginning. I’m refering to the education and research project in the field of music. It starts in Mihăileni, at the Enescu house, and we hope to include as many interested people from the international world as possible. In the seven years of sustained efforts, the place where Enescu spent a lot of time, in childhood and adulthood, was rehabilitated, restored, completed. At the same time, it has become a pretext for many people from different villages, cities or countries to come together and make plans together to turn this place into a landmark for future cultural projects. The building will not only be a museum, but a place for exchanges of views on music, education and expanding the field of research, with scientific and aesthetic shades. This is how a porch that surrounds two sleeping quarters, a few rooms and a typical Moldavian kitchen with a bed over the oven can become a favorite place for the most prestigious artists of the future. ” – Serban Sturdza,president of the Pro Patrimonio Romania Foundation

“There are moments of grace in life when the surreal becomes real and dreams become reality. Mixing in a handful of beautiful, smart and incredibly good children, although noisy, in the yard of Enescu’s childhood home in Mihăileni is such a moment. After years of hard work and effort, the dream of kind and idealistic people, confident in lost causes – after all, the only ones worth fighting for – has come true. We thank all the donors and supporters who joined us and were not scared! Together we managed to transform the sad, desolate and shameful image of a ruin into a living, cheerful and authentic space! I think the Master would be happy to walk among the kids, with his hands behind his back and already quite bent, and to ruffle one or another restless kid with his huge hands. He might have crafted a violin out of a corn stalk or them, but he would have liked to gently direct the brush on paper and mix the watercolors, as he juggled the harmonies of his mother’s old piano in the house in Mihăileni.

Dear Master, we hope you enjoy our gift and our reverence! And maybe you’ll visit us, from time to time, to tell us if we’re doing our job well … ” -­pianist Raluca Știrbăț, president of the “ George Enescu ” International Society in Vienna.

“I am glad with all my heart that today, finally, George Enescu’s house in Mihăileni will be officially inaugurated. More than 6 years ago, when I first went there with Mr. Archbishop Serban Sturdza, such a moment seemed a pure fantasy. Here that the sustained efforts of the entire community of artists, architects, people passionate about culture have finally yielded results. I would like to thank all those who supported this cause and especially Raluca Știrbăț. The Remember Enescu Cultural Foundation has been organizing cultural activities in Mihăileni for 5 years – classical concerts, within the Stradivarius Tour, summer masterclasses, painting camps, etc. I am sure that George Enescu would have been shocked by the emotion and joy seeing what is happening today in Mihăileni. ”

„The inauguration of the Enescu House from Mihăileni is an event of major importance for the Romanian culture. The resonance of the complex activity that George Enescu had is continuous and inspires the lives of musicians everywhere with a special intensity. It is a Romanian duty to remember the Enescian genius in the richest possible forms. The initiative to create an Enescu House open to musicians, composers and music lovers magnetizes with a special force and fulfills a dream, which has been fully realized.

I would like to congratulate especially the initiator of this project necessary for our nation, Raluca Șirbăț, pianist and special personality of our musical world, who managed to excite a team of precious collaborators, who brought this wonderful dream to fulfillment. ”

“At a time when everything is falling apart around us, from the cancellation of shows, concerts and the diminution of culture in general, new rays of light appear, such as this wonderful house of Enescu’s from Mihăileni. Remade and ready to be connected to the music world, it is an element of national pride. A kind of normalcy obtained with abnormal efforts, in a country that wants to be normal ….

Thank you Raluca Știrbăț for saving this building and I can’t wait to see it with my own eyes! – Remus Azoiței, violinist, professor at the Royal Academy of Music, London

Video message sent by Ștefan Șimonca-Oprița, violinist, student at the Faculty of Music in Saarbrücken https://bit.ly/ȘtefanȘimoncaOprița

The inaugural concert of the George Enescu House is part of the project “EventFull Days at George Enescu House – cultural-musical explorations and exercises”, a cultural project realized by Pro Patrimonio Foundation in partnership with UiPath Foundation, co-financed by AFCN. The project does not necessarily represent the position of the National Cultural Fund Administration. AFCN is not responsible for the content of the project or how the project results can be used. These are entirely the responsibility of the funding beneficiary.