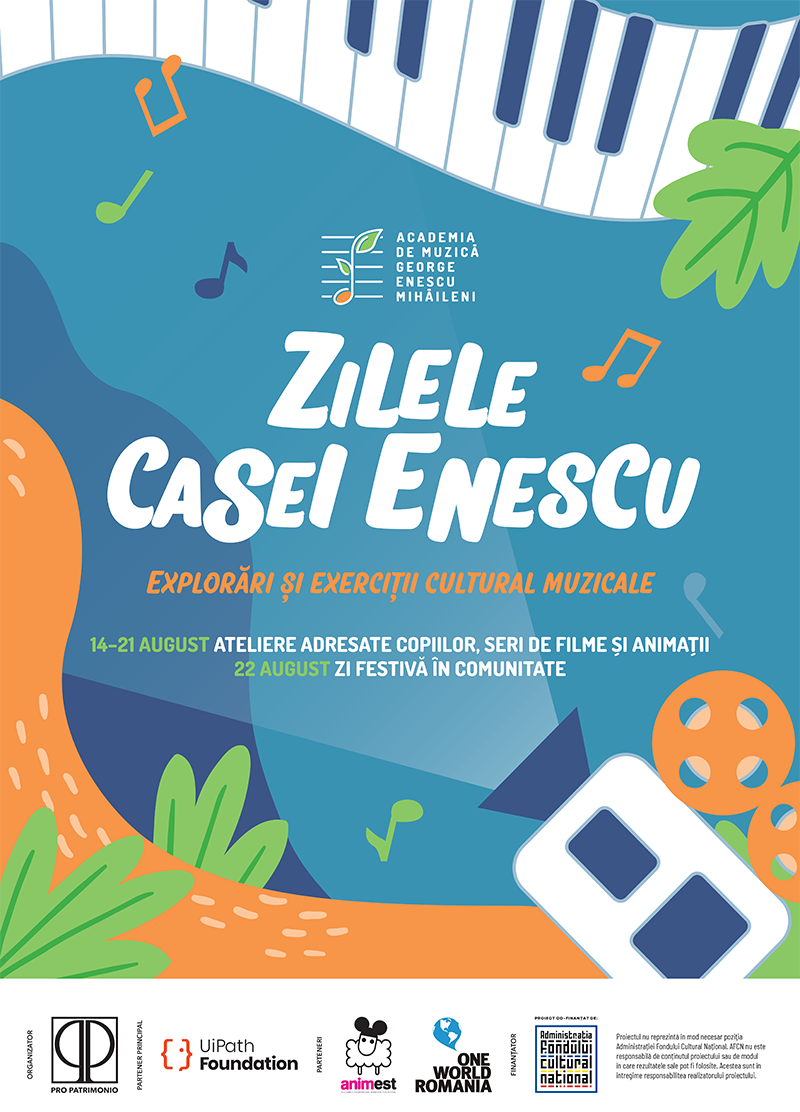 The activity event calendar in the community from Mihăileni are the following:

August 16 – Sound Workshop – sound research and interpretation, along with group experiments and the practice of building a musical instrument

August 18 – Heritage Caravan – Who is the landscape designder? – proposing a 3D plan for arranging George Enescu’s house garden and the exercise of some artistic installations made of wickerwork

August 19 – Heritage Caravan – Who is the historian? – discovering the story of George Enescu’s house, of the one who lived in it and of some musical elements from George Enescu’s work, in the form of a dynamic game with physical and cultural tests

August 20 – Heritage Caravan – Who is the architect? – discovering the constructive layers of the house by creating a model-object

August 21 – Animation Workshop – theoretical elements and the practical exercise of making an animation about the story of Enescu’s house: the construction of frames and characters, animation of frames, filming, sound and editing

August 22 – Festive Day in the Community – exhibition with children’s works, culinary contest in the community and other surprise elements addressed to the whole community.

In all nine evenings we will have an animation and film program open to the whole community – within the available places – with the support of ANIMEST and ONE WORLD ROMANIA.

Supplemental: August 19 – The Inauguration Concert of George Enescu’s house in Mihăileni performed by pianist Raluca Ştirbăţ and soprano Ileana Tonca, active supporters of saving the house, will take place in the house and will be broadcast outside to a small audience in the yard

All 15 children who will take part in the program were selected with the help of community teachers based on their interest.

EventFull Days al Casa Enescu – Cultural-Musical Explorations and Exercises is one of Pro Patrimonio Foundation’s cultural projects, co-funded by AFCN and carried out in partnership with the UiPath Foundation, which started in early July through a mapping and research of local craftsmen and will continue in August with heritage workshops for children, an inaugural concert on August 19 and other surprises that we hope we can safely put into practice.

EventFull Days al Casa Enescu – Cultural-Musical Explorations and Exercises is one of Pro Patrimonio Foundation’s cultural projects, co-funded by AFCN and carried out in partnership with the UiPath Foundation