The Pro Patrimonio Foundation launches the international fundraising campaign to save the fresco of the wood church of Urşi, thus completing the entire process of restoration of the monument and returning it to the local community. 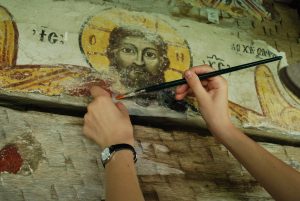 The wood church of the village Urşi (the parish Popeşti, Valcea county, the XVIII th century ) is a part of the project 60 wooden churches, deployed by the Pro Patrimonio Foundation.  Over time, they had as partners the Europa Nostra organization, The Romanian Order of the Architects, The National Arts University, The Assosiaction 37, The Dala Foundation, The Astra Museum from Sibiu, The Romanian Peasant Museum, Artis Periţia, while the financial support was due to the international orgabnisation World Monuments Fund, Headley Trust, International Music and Art Foundation, Holcim Romania, European Investment Bank Institute.

The program of 60 wooden churches was initiated in 2009 by the architect Serban Sturdza and was carried out wuth the help of over 100 young people wit different professions (architects, restorers, engineers, sociologists, and so on), most of them volunteers, through specific and precise acts of intervention, documentation and promotion of the monitored churches. They joined the responsible effort made by the priests and the parochial communities, who inherited wooden churches, classified as historical monuments, situated in cemeteries and often abandoned. Most of them are in a severe state of structural and artistic degradation. Their use and maintenance in good shape is the duty of the community of believers, who conserve this way the tradition, history and identity of its own settlement.

Designed as sacred spaces for Christian religious assemblies and ceremonies, the old churches – built of woodwork by the village craftsmen and painted with grace- represent spirituality.

They are also exceptional cultural patrimonial objects transmitted to us as heritage and a vualuable lesson from our ancestors. The ensemble of the wooden churches in Northern Oltenia (the Gorj and Valcea counties) and in Southern Transylvania (Hunedoara and Sibiu counties) is considered as an exceptional cultural landscape, that identifies itself with the local communities.

All these rescue and restauration operations also have a social component, that seeks to reintegrate the church as a valuable patrimonial object in the life of the local community, re-opening and constantly  using the building with religious, educational and cultural tourism function.

“A society that develops itself and is strong imposes itself also by rending to the heritage what it creates. A developed society will leave behind a growing heritage when compared to what it has received. In order to do this, it must also take care of the inherited heritage.” (architect Serban Sturdza, vice-president of Pro Patrimonio Fundation).

Since the beginning of the project up to now 14 emergency interventions, 10 complete wooden shingles replacements, 8 restorings were made, 50 wooden churches  have been documented (through architectural relevees)   and two conserving projects have been prepared with the assistance of Europa Nostra, intending to apply for financing. The high value mural painting (fresco or al secco) comprises 2000 m2 .  Almost 30 churches are painted inside. Extensive emergency or conservation work have been matched by public events, fundraising concerts and exhibitions, which were designed to highlight the wooden church and to revive the interest of the communities in these patrimonial jewels.

The church from Ursi, dedicated to the Annunciation and St. Archangel Michael (code in the List of the Historical Monuments VL- II- m-B-09954) was built between 1757 and 1784, having Ion Danciu and the priest Constandin as founders. Atfer the fire of 1838, the church has been repaired and painted in 1843 by the craftsmen Gheorghe, Nicolae and Ioan both inside as outside. Since 1913, a new masonry church was built in the village, the wooden church being abandoned in the cemetery. The last repair took place in 1943.

Its restoration began on the 12 th of June 2010, a following the collapse of the vault over the altar, with an emergency intervention initiated by the Order of the Architects of Romania and Pro Patrimonio foundation in 2000. The actual time of intervention on the monument, due to the specific of the restoration activities, is four months a year, from June until September. For the rest of the time, the foundation concentrates on activities of fundraising to continue the project.

The funds raised through different actions and events during 2011-2019 were used for: consolidating the paintings, unfolding the arch (the beams and the iconostasis being restored at the National arts University of Bucharest), attaining of new stone basis, replacing of the bases and of the rotten beams of the structure, restoring of the arch, of the framework and of the shindel roof, conserving the interior and exterior frescos, repairing and completing the inner furniture, vertical systematization. The money was donated exclusively by individuals, companies and private organizations: World Monuments Fund, Headley trust, Holcim Romania, International Music and Art Foundation. The local community (parish, city hall, the village residents) supports the project every year, offering accommodation and food to all the volunteers, the restorers and the craftsmen working here.

“ It was a joy (…)  saving the church of Urşi. It’s a church historical monument. Similar to it, there are all our late peasant churches, a great treasure, to which something strage happens. These churches disappear first. Situated between the folk art and the great medieval art, they are considered as outside “of the great path of history”. But they are the pride of a vivid world, to which we have survived, when around us a whole world changed its looks. They will disappear first also because they are made of wood. We have to take care of them too! ” (Interview with prof. Dr. Dan Mohanu, Bucharest National University of Arts, “ As a restorer painter one must have to have faith and to be living the church life” , Formula As , no.1247/ 2016).

The wood church of Ursi needs more 12,000 euros, this being the last amount of money necessary to fully end the action of restoring the fresco, to reassemble the inner furniture and returning the monument to the community. Having the slogan Give so history can live we begin an international fundraising campaign both on the platform of crowdfunding www.dartagnans.fr and on the Pro Patrimonio Foundation website.

Your generous contribution will allow us to return a small architectural jewel to the local community, to the national patrimony and to the European culture. Thank you!